Samsung has outlined its technology roadmap through 2017, and one of the notable mobile features that the company is committing to will be foldable displays. This should pave the way to phones with screens that not only flex and bend, but can fold, to encompass new and currently un-imagined form factors and usage scenarios by as early as 2015 by Samsung’s predictions.

As part of its mobile forecast as revealed by an image posted on Engadget, Samsung says that through early next year, we will be seeing more curved displays, which is something that the company has experimented with fixed flexible displays on its recently introduced Galaxy Round. Through 2014 and into mid-2015, we will see displays that bend, and moving forward beyond 2015 we will see displays that can fold. 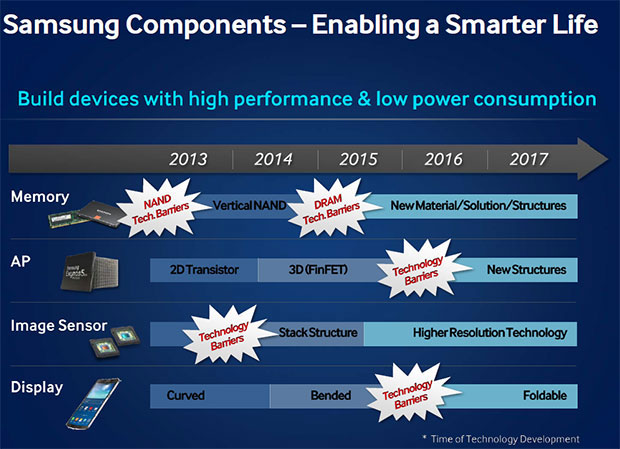 Foldable displays could potentially allow consumers to carry even larger displays and screens with them, further blurring the line between phones, phablets, and tablets. Though the screens are larger, the ability to fold these screens will at the same time make them even more portable.

Flexible displays like the one Samsung is working on will see their reach beyond just mobile phones and tablets. These displays will also affect new emerging product categories, like wearable computing, where screens can bend and wrap to fit the user, such as on the display of a smartwatch.

As Samsung already has a Galaxy Gear (reviewed) smartwatch line, advances in flexible display technology could help the company accelerate development of its smartwatch.

In addition to Samsung, rival LG is also ambitious with its flexible plastic OLED display panel. The company had unveiled the LG G Flex to compete against Samsung’s Galaxy Round, and the company recently demonstrated one of the main benefits of flexible displays–a more resilient smartphone that is more resistant to breaking and scratches; in a short YouTube video, LG showed that the fixed flexible screen of the G Flex can be bended and not break or crack as a glass screen would.