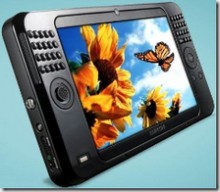 The Samsung Q1 Ultra seems to be the big news grabber so far from CeBIT. This next generation UMPC is catching a lot of eyes for its split keyboard and the included WIBro (for other than the US.) Later news comes in that Samsung is looking to market a second version of the Ultra at a lower price. Apparently the device we’re seeing tons of pictures of will be in the same price range as the existing models, but a different version will be lower priced. Sound confusing. Does to me to.

In any regard, here’s a round up of some of the coverage on the Q1 Ultra.

SlashGear (more pictures than you can shake a stylus at)

And something tells me to keep an eye on Steve (Chippy) at the UMPC Portal. I’m sure we’ll see much more from him soon.

UPDATE: Gizmodo links to video of the Q1 Ultra here.