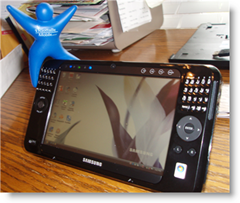 Well, I have been waiting impatiently for my new OQO Model 02 to show up while playing with the new Lenovo X61.  No shortage of fun around here right now.   When I saw a box had arrived today, I got the familiar old feeling I get every time something electronic shows up on the doorstep of GBM Southeast regional office!  You know that feeling, right?  Technolust!

A quick glance at the label on the box showed that it was a package from Samsung, which told me right away what was inside, a new Samsung Q1 Ultra UMPC!  As you can see from the picture, Splotch climbed right on the thing, ready to go for the big ride (he makes little squeaking noises every time a new device shows up – No, really, he does!)!  Get off there Splotch, there is serious playing (I mean work) to be done here!

Well, there was no other choice (since work was out of my head for the day) but to open the box and get that all important 1st impression.  Here is my real quick bulleted list of thoughts as I picked it up and spent about 20 minutes before running off to normal domestic husbandly evening duties:

Okay, that is about all for now, InkShow coming folks, so if you have questions, get em in now so I can address them in the show!  More later folks!