It looks like not only is Samsung updating the internal components of its 10-inch Galaxy Note tablet–a device that will join the company’s 5.3-inch Note on the market today that’s sold as a smartphone–but the company will also be making some slight hardware revisions to the tablet as well. In particular, rather than requiring users to carry around a separate stylus like HTC’s Jetstream 4G with the HTC Magic Pen, Samsung is making some changes to the design of the Galaxy Note in order for the slate to accommodate the S-Pen in the body. This stylus slot would be similar to what’s found on the 5.3-inch Galaxy Note. 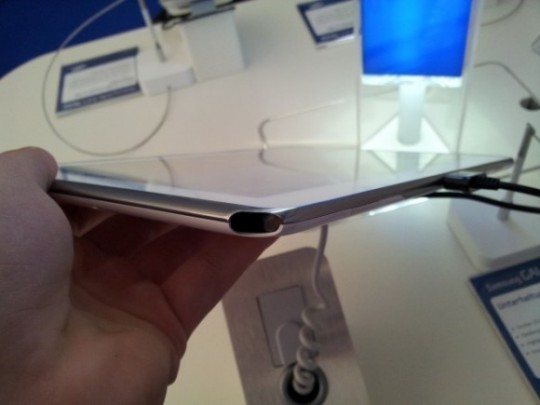 The S-Pen that will ship standard with the Galaxy Note 10.1 will be slimmer than what was previously shown at Mobile World Congress so that the bundled pen would be able to fit into the body of the slate, according to Android Community. Samsung would likely make a companion pen for heavy users as well for improved ergonomics as an optional accessory, similar to how it is offering the S-Pen and S-Pen Holder for the Galaxy Note 5.3.

Internally, the Galaxy Note 10.1 will be making the jump to a quad-core Exynos CPU as well, rather than the dual-core that was shown at Mobile World Congress.

Samsung will most likely be bundling pre-installed Note-optimized apps on the Galaxy Note 10.1 similar to the premium software suite that will be available once Ice Cream Sandwich hits the Note 5.3. This will help users who make the additional investment to get the tablet with the S-Pen some added value.

Samsung so far has not announced a launch date for the tablet nor has the company given any indication on pricing.