It might come as a surprise, but Samsung hasn’t given up on Windows 7 tablets. In fact, the company has just showed off the Samsung Series 7 Slate with Windows 7, Wacom digitizer and a dual core processor.

While you may be focused on Windows 8, and how it could mark the rebirth of Windows tablets, I thought you might like a look anyway. 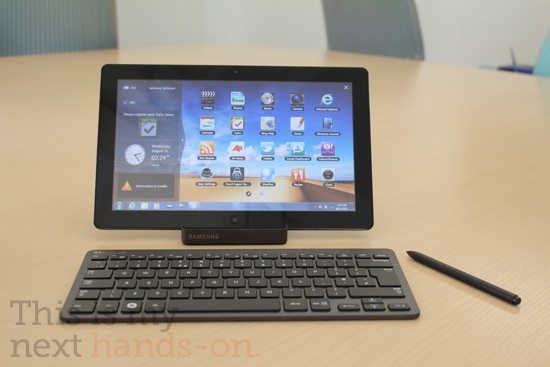 The Samsung Series 7 Slate has a Wacom digitizer and runs Windows 7.

The Samsung Series 7 Slate is an 11.6″ Windows 7 slate that looks pretty thin, compared to many Windows 7 Tablet PCs we’ve seen in the past. Inside, this tablet isn’t a slouch. You’ll find an Intel Core i5 2nd gen processor, 4GB RAM and the choice of a 64Gb or 128GB SSD. Reportedly this power sipping tablet can last 6 hours, which would be impressive if it can deliver. There are front and rear facing cameras, 2MP and 3MP respectively for sharing and video conferencing.

The tablet comes with a stylus, and the more expensive 18GB version includes a dock and keyboard in addition to the stylus.

This Is My Next went hands on with the device and had this to say about the Samsung Series 7 Tablet screen,

However, the most impressive part of this slate is the 1366 x 768-resolution 11.6-inch, 400nit display that’s equipped with a Wacom digitizer. The pressure-sensitive stylus glides across the screen and the capacitive screen itself is responsive to finger input

Sadly, it didn’t hold up under fingertip use, which is expected given the Windows 7 operating system, but still a disappointment.

You can get the Samsung Series 7 Windows 7 Slate for $1,099 for the 64GB version and $1,349 for the 128GB version with accessories. This will be a tough sell with competing tablets clocking in around $500 and WIndows 8 around the corner, but if you must have Windows 7 — and you like the slate form factor this is one of a handful of choices. Samsung claims they want to have an upgrade path to Windows 8, but I wouldn’t buy on that promise alone.