It looks like NVIDIA may not be the only one to be promoting quad-core ARM processing power at Mobile World Congress as Samsung may hit the trade show later this month with its own offering in the Exynos chipset line. The company had recently shown off what a quad-core Exynos processor could do, and Samsung may be taking on MWC with some Exynos demos though it’s unclear if Samsung or other smartphone- or tablet-maker will be showing off a quad-core Exynos device at MWC whereas NVIDIA will probably have shipping products from hardware partners to announce at the show. 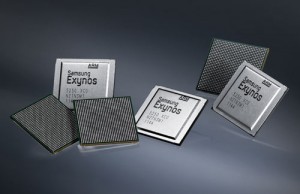 The chips utilize the older ARM Cortex A9, rather than the ARM Cortex A15 architecture that Texas Instruments is promising on the next-generation dual-core OMAP5 chips, but is packaged in a smaller package thanks to a 32 nm manufacturing process. The chips are said to be faster, more power efficient, and can provide asynchronous processing, which means that cores can be activated or turned off as needed to help further conserve battery power. This way, only the most intense of applications or games will require all four cores to be fired up simultaneously.

The chips will also support new low-power DDR3 memory along with a new GPU.

While the quad-core Exynos processors offer a lot of promise, it’s unlikely that the chipsets will make it to the Galaxy S III third-generation flagship smartphone, which will be announced sometime in the first half of this year. That device may ship with an updated dual-core Exynos processor. Quad-core Exynos may end up powering a future Galaxy Tab model before making it into a Samsung smartphone. Hopefully, we’ll know more details at Mobile World Congress in Barcelona.