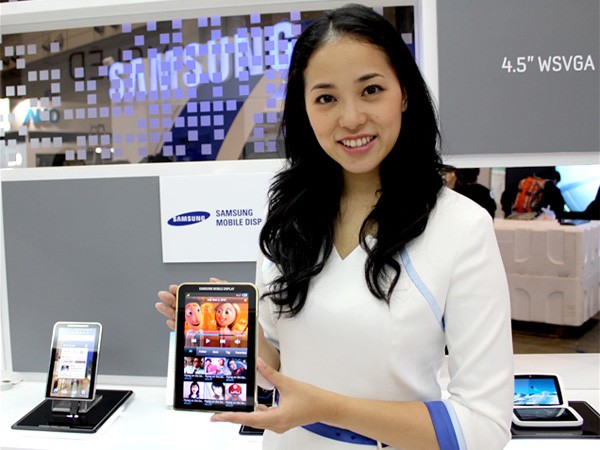 Samsung really is bringing more tablets to the market. After the company has shown off a larger 7-inch Super AMOLED panel display, Samsung is now showing off prototypes of tablets with the mentioned screen. The new 7-inch Galaxy Tab Super AMOLED display has a slightly higher resolution than the current crop of Galaxy Tabs with a more traditional LCD screen, measuring in at 12600 X 600 pixels rather than the 1024 X 600 of what’s being seen on current generation tablets.

What’s even more interesting is the dual-display clamshell tablet model that’s sitting in the back to the right. There is not much information about that tablet right now other than the fact that it sports two displays, each measuring 4.5 inches.

Samsung has been optimistic with the consumer tablet market and has committed to bringing slates of various different screen sizes to the market in the coming year. The company’s current Galaxy Tab competes in the high-end slate market, with unlocked prices hovering around $600 for the Android-powered mobile computing device, which Samsung says is still pocketable at 7 inches.