Since Samsung had popularized the phablet category by introducing its 5.3-inch Galaxy Note late last year, the company has managed to move over 10 million units of that category-defining smartphone. After broad appeal in foreign markets, the Galaxy Note 5.3-inch was introduced to U.S. audiences earlier this year through 4G LTE carrier AT&T and more recently on T-Mobile USA’s HSPA+ network in the States. 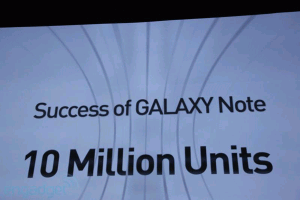 Engadget reported that the 10 million mark is the latest milestone that Samsung has released for the 5.3-inch smartphone. It announced that it had moved 1 million units at the end of last year before the Note had reached U.S. soil and by the end of March, Samsung had managed to move 5 million units.

The company more recently announced the Galaxy Note 10.1, which is a more traditional tablet with a 10.1-inch display and the company’s S Pen digitizer. Also rumored for an introduction at the end of the month is a Galaxy Note 2, which is rumored to have a slightly larger display in the 5-inch realm alongside other enhancements. Recent speculations for that phablet include rumors of a flexible AMOLED panel that would allow Samsung to create a curved display, a larger battery, and a slightly larger touchscreen panel.

Though Samsung may have popularized the 5-inch phablet category, it was not the first manufacturer to venture into this space. Dell initially launched a massive 5-inch Streak in the early days of Android, and the large, yet still pocketable display, launched a polarizing debate among users if the device was too big to use as a phone. Since then, Pantech had joined the category with its Vega smartphone of 5-inch size and LG had entered the race with its Optimus Vu smartphone. HTC is rumored to be working on a high-end phablet as well.