Samsung Spent 4 Billion in Marketing to Rival iPhone in 2012

Last year Samsung became Apple’s biggest rival in the smartphone market, and it spent four times as much on marketing as Apple did to get to that point.

Today the Asymco blog updated a story about how much Samsung spends on its mobile efforts with a chart comparing the company’s marketing budget with that of Apple and other companies. The chart includes advertising budgets from every year from 2009 to 2012, and during that four-year period Samsung outspent Apple every year.

Over the course of four years Apple doubled its advertising budget from about $500 million to about $1 billion. In the same period Samsung increased its marketing from just over $2 billion to more than $4 billion. 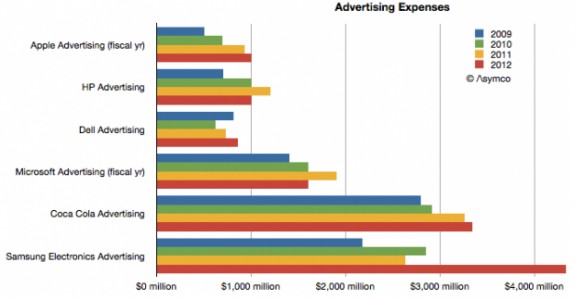 Amazingly, by 2012, Samsung was even outspending Coca-Cola, one of the largest advertisers in the world. Apple, meanwhile never spent half as much as Coca-Cola, and consistently spent less than it’s one-time major rival Microsoft.

Samsung also spend $5.3 billion in Sales Promotions in 2012. Apple doesn’t supply those numbers, however, so it’s impossible to compare the two.

Samsung’s marketing budget help put the company’s smartphone everywhere at the London Olympics last summer, and paid for the company’s series of ads such as the recent Unicorn Apocalypse ads and the creepy Santa ad from last year.

Apple is less aggressive with its marketing for the iPhone and iPad. With pressure from Samsung increasing this year, the company may choose to spend more, however. Apple may decide to put a bigger marketing push than usual behind the iPhone 5S which will come out later this year. The latest rumors say it may come sometime this Summer, with a June release possible.

Later this month, or in early May Samsung will release its new Samsung Galaxy S4 in the U.S. The phone will likely come with a big marketing push. Samsung’s huge marketing budget means users will likely be bombarded with ads for the new 5-inch smartphone. Samsung already proved its willing to rent out Radio City Music Hall for a night just to launch the phone, which probably wasn’t cheap.