The teaser for the new ad doesn’t talk much about what the ad will contain beyond what Rogen and Rudd can talk about in the ad. The one minute teaser features Bob Odenkirk (Saul Goodman on Breaking Bad) telling the two comedians that they can’t say the words “Super Bowl,” “49ers” or “Ravens” in their new ad.

The new ad will use Samsung’s “Next Big Thing” tagline which is uses in ads for both the Galaxy S3 and Galaxy Note 2. Odenkirk has one of the devices in front of him with a light blue case as he talks to Rogen and Rudd. Rogen and Rudd also handle the devices during the teaser. It’s not clear if the new ad is for a specific device, or just Samsung devices in general.

While the teaser is great at making viewers want to watch the actual ad when it airs, it’s also a funny take on just what advertisers can and can’t say in regards to the game. Because the NFL copyrights the name of the game and the team names, companies have to hope people know what they’re talking about when they say “Big Game,” San Francisco and Baltimore. 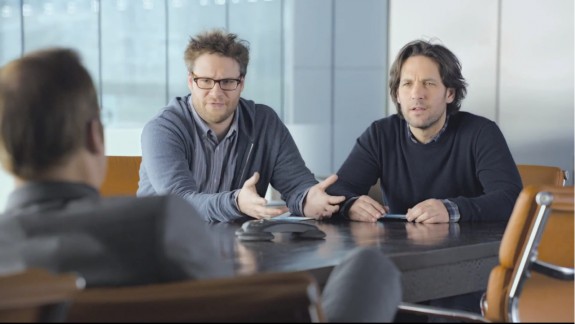 Rogen and Rudd get around the restrictions by referring to the Super Bowl as “The Big Plate” which involves the “San Francisco 50 Minus 1ers” and the “Baltimore Black Birds.”

Oh, and they also have to use hashtags. Because of course everything needs a hashtag. Hopefully the hashtags are more interesting than #TheNextBigThing.

According to Mashable the full Super Bowl ad will clock in at two minutes, and Jon Favreau (director of Iron Man) will direct the spot. Samsung will release the full ad and an extended cut version later this week.