Samsung has announced a new external portable storage drive at CES this year, which delivers portability, fast speeds, and extra protection all around.

The Samsung T3 is a marked improvement over the company’s T1 drive that was released last year, only this time around it comes with USB-C, which allows for way faster transfer speeds up to 450MB/s.

The T3 measures in at just 2.9-inches long, 2.3-inches wide, and 0.4-inches thick. It also only weighs 1.8 ounces, making it one of the lightest portable drives around. And if you accidentally drop it, there’s nothing to worry about, as the drive can easily survive a drop from up to two meters high onto concrete. 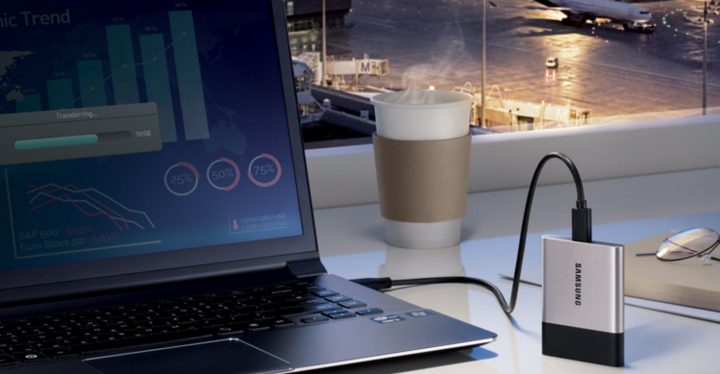 It comes with a solid-state drive on the inside, which means there’s no moving parts that can shift around and break if the device gets dropped by accident.

Storage options include 250GB, 500GB, 1TB and 2TB models, and if you’re a security nut who likes your privacy and security, the drive comes with AES 256-bit hardware encryption that password-protects the drive so only you can see what’s on it.

Pricing details haven’t been disclosed yet, but considering that Samsung’s T1 1TB drive was priced at around $600 when it released, you can probably expect the T3 to cost a significant amount of coin. Availability wasn’t disclosed either, although we can probably expect it to release later this year at some point.