Samsung’s updated TecTiles 2 tags are now available for users to purchase from the company’s online store.

It’s these updated TecTiles that will allow owners of the Samsung Galaxy S4 to make use of the near-field-communications chip in their devices.

Users can order the TecTiles 2 tags immediately for $14.99. According to the site, orders processed below $49.99 will ship the next day for just an additional $3.95.These packs include five individual tags.

This past April Samsung confirmed reports from AnandTech that it had replaced the internal NFC controller that it used in the Samsung Galaxy S3 with one that was standards compliant and could be used in conjunction with a wider range of other devices. Unfortunately that meant that users of the Samsung Galaxy S4 would need to purchase these new TecTiles 2 NFC tags and replace all the TecTiles they’d purchased previously.

According to Samsung, users would still be able to “fully utilize” these new TecTiles 2 tags with all exiting Android devices, so while Galaxy S4 users are being forced to buy new tags, they won’t need to worry about the possibility of these new tags not working with their older devices as well.

Together with Samsung’s TecTiles application for Android, users are able to make NFC tags that automatically changes the device’s settings once they’re come in contact with each. For example, a user could have an NFC tag waiting by their front door that could turn off their device’s wireless data or adjust their ringer. 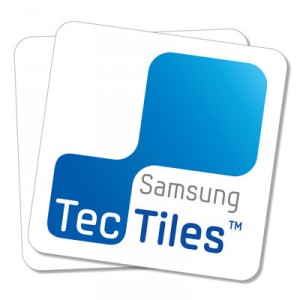 In GottaBeMobile’s review of the original TecTiles, we found their ability to modify settings, launch applications and send automated messages to be fairly useful. The original TecTiles also cost users $15 for five tags –the exact amount Samsung charges for TecTiles 2.

NFC compatibility is found in nearly every flagship smartphone with the exception of Apple’s iPhone 5. Rumors have indicated that NFC functionality might be included in an upcoming refresh of the iPhone 5 this summer, called the iPhone 5S.