Samsung will show off a Galaxy Note 2 sized 5.5-inch flexible display at CES 2013 in January, but the cool new screen tech may not be ready to roll out in time for the Galaxy Note 3 and Galaxy S4.

At the major tech event in Las Vegas, CNet says Samsung will show off two flexible displays. The flexible displays do not yet roll up like paper, but they do afford Samsung design freedom that competitors are missing. 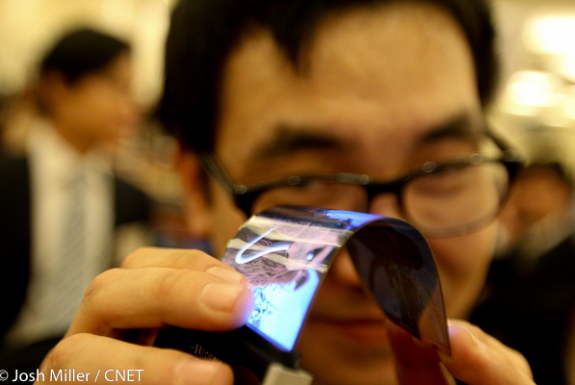 Though this demo looks like it could swap right into a Galaxy Note 2, we’re hearing that the Galaxy Note 3 may feature a 6.3-inch display, so Samsung will need to super-size the new tech if that rumor is true.

Though the Samsung flexible display can’t yet roll-up, it will allow designers to add more curve to the smartphones. This is important especially for larger phones like the Note 2 which feels like holding a small paperback book to your face. A curve would offer a more natural fit.

In addition to being flexible, a display like this is reportedly more durable than those covered in glass on today’s smartphones. It’s not clear if the flexible display tech that Samsung plans to demo at CES 2013 is also unbreakable like the concept shown off at CES 2010.