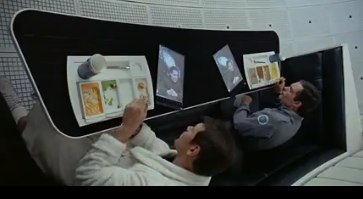 Well, after doing a bit of rolling around in my office chair during the East Coast earthquake this somehow seems like an appropriate post. (BTW, both Sumocat and I who are located in the northern and northwestern VA areas appear to be OK.)

Apparently Samsung is going to use Stanley Kubrick’s classic film, 2001: A Space Odyssey in its legal battles against Apple as kind of a prior art claim. In case you haven’t been following, Apple has filed infringement  claims against Samsung Android devices saying that Samsung heisted some of its intellectual property. Apple is working to keep Samsung from selling the devices and is even seeking a recall of the Galaxy Tab 10.1.

So, now Samsung says Apple stole the entire Tablet idea from 2001: A Space Odyssey and so therefore has no valid claim.