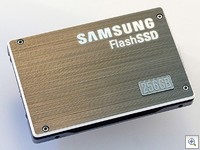 The SSD race is in full swing and Samsung is running hard. They’ve just unveiled plans for breakthrough in SSD technology and will be featuring that breakthrough in a new 256GB SSD planned for release later this year. According to this post on electronista it will read data twice as fast as its predecessors, with an even greater increase in write speeds bumping up from 70MB per second to 160MB per second.

The new SSD uses a multi-level cell storage technology as opposed to single cell which supposedly costs much less to produce. Also this advance comes with improved controller technology that offers a life of the drive that is comparable to single cell drives, and supposedly as good or better than some spinning hard drives.