While there were previously leaks about Samsung‘s efforts with the Windows Phone efforts with several new models this year, the company’s Taiwan arm confirmed that while there will be new Samsung Windows Phone smartphones coming, none will arrive before Microsoft releases its next-generation Windows Phone 8 software. Windows Phone 8 has been known and referred to by its codename of Apollo in the past and is scheduled to bring multi-core processors and other features to make the platform competitive on paper against rival platforms. 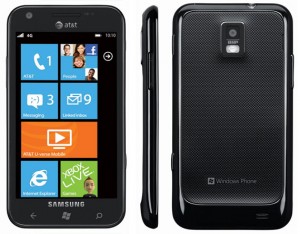 Unwired View is reporting that Samsung Taiwan confirmed that at least one Windows Phone 8 model will arrive by October, suggesting Microsoft will unveil its new mobile OS around that time frame. In addition to Windows Phone 8, Apple is also speculated to release the iPhone 5 during October and Google may have new Android 5.0 Jelly Bean devices.

While Windows Phone support single-core processors, many new devices running the Mango build of Windows Phone models run a Snapdragon single-core chipset supporting up to 1.5 GHz clock speeds. On the platform itself, the single-core CPU is zippy enough to complete many tasks, but consumers may be pulled to Android’s dual- and quad-core CPU support on paper. Microsoft and its partners have contended that single-core CPU and Windows Phone 7 is efficient enough to be faster at completing many tasks compared to rival mobile operating systems.

While HTC and Nokia had unveiled new Windows Phone models with the Mango OS in the form of the HTC Titan II and the Nokia Lumia 710, 800, and 900 devices, Samsung Taiwan confirms that it is skipping the Mango release.

Following the Mango OS update and before the Apollo Windows Phone 8 release will be Microsoft’s Windows Phone 7 Tango build. Samsung is expected to release a phone codenamed Mandel with a 4.3-inch WVGA display for AT&T’s 4G LTE network, placing the phone in the same league as the HTC Titan II and the HTC Lumia 900 with fast mobile broadband LTE support. It’s unclear when that phone will debut at this point.