Samsung has confirmed plans to transition to a 64-bit application processor for its ARM-based Exynos CPU using a two-step approach, and the move should have Microsoft and its Windows business unit concerned.

Following Apple’s lead in transitioning to 64-bit with the Apple-designed A7 on the iPhone 5s, iPad Air, and iPad mini with Retina Display, Samsung’s 64-bit application processor, or AP, would likely find homes on flagship Android-powered Galaxy smartphones and tablets and could potentially even land on Samsung-made devices running the new Tizen OS.

Some of these devices could include a Galaxy S5 flagship that’s due in spring 2014, a Galaxy Note 4 in fall 2014, and various smart cameras from Samsung, including potential refreshes of the Galaxy S4 Zoom (maybe Galaxy S5 Zoom), an updated Galaxy Camera, and a new Galaxy NX mirrorless camera system. 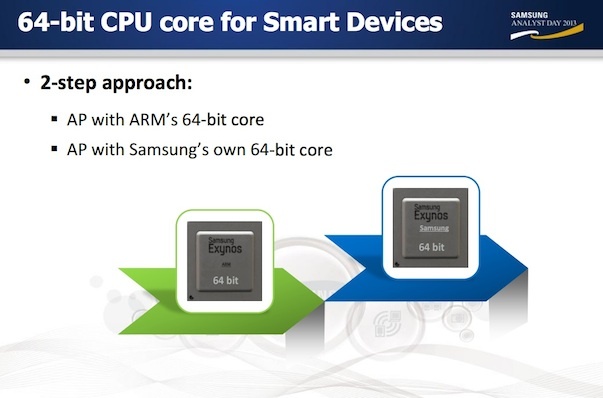 According to CNET, the road to 64-bit for Samsung will consist of two steps–starting with ARM Holdings’ 64-bit ARM design, and then adding Samsung’s own touches and optimizations to arrive at an Exynos-branded 64-bit AP.

So what’s the hype with 64-bit, and why should Microsoft be concerned?

64-bit architecture will allow Samsung to push forward to use 4 GB of RAM or more on a mobile device. Today’s 32-bit architecture on flagships like the Galaxy Note 3 (reviewed) max out at 3 GB of RAM. And with RAM being important for multitasking, Android’s potential to be a serious multitasker will only be enhanced.

What this could potentially mean is Samsung’s excellent simultaneous multitasking utility, known as Multi Window, could be put on steroids.

Currently, to balance between serious mutitasking and battery life while conserving resources for other apps and processes in the background, the number of apps compatible to be used with Multi Window is limited to a select few third-party apps and a number of pre-installed apps. This means that some apps, like Netflix, cannot be used side-by-side with another task, limiting the true usefulness of simultaneous multitasking for serious power users.

But with more RAM, Samsung could expand multitasking to even more apps so potentially any and all third-party apps could be snapped side-by-side with another app to allow users to simultaneously juggle two or more apps at the same time. Microsoft expanded this simultaneous multitasking on Windows 8.1 by allowing up to four apps–depending on screen size and resolution–to be used at the same time, and Samsung could allow for similar features, but take this down to the phone level, making your phone just as powerful as a desktop PC.

Additionally, another way to multitask on the Galaxy Note 3 and Galaxy Note 10.1 is the Pen Window view that is activated by the S Pen’s Air Command menu. Users can draw multiple rectangular “windows” with the S Pen and launch apps as floating or cascading windows, similar to the old “windows” view of Microsoft’s Windows 7 or Windows 95. These floating windows could be repositioned and resized to fit your needs, minimized, or be taken to full screen, similar as on Microsoft’s desktop-class PC.

Pen Window is currently limited to a few select apps, like Multi Window, and more RAM could allow Samsung to expand support and bring any or all third-party apps to be compatible in Pen Window so you can run Hulu Plus, Amazon Kindle, or eBay, for example, in a Pen Window with 64-bit and more RAM.

Though the Pen Window feels cluttered on a smaller screen, the feature will definitely be more useful on a larger screen like the Galaxy Note 10.1 2014 Edition (reviewed). And given that there is chatter that Samsung is working on a larger 12- or 13-inch Galaxy tablet edition for 2014, the feature will offer even more benefits to a larger, higher resolution display that could rival desktop-class tablets, like Microsoft’s Surface Pro 2 (reviewed) with Windows 8.1.

So while Apple’s post-PC revolution brought multitasking by allowing us to switch between single apps on our screen, the Samsung post-PC revolution will bring multiple apps to a single screen. This actually brings us full circle back to how apps ran on a PC, so Samsung’s post-PC will definitely tackle Microsoft’s PCs.