Bloomberg reports that Samsung’s head of PC sales and marketing said in an interview that the company is targeting the second half of 2012 for a Windows 8 tablet launch, and it will probably be a mod of their current Series 7 slate. 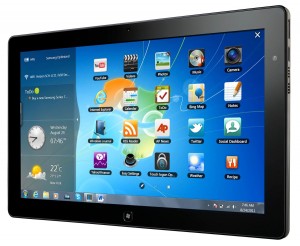 While the idea of launching with a model that will already have been on the market for a year by the time Windows 8 rolls around may sound like a lazy move, it actually makes a lot of sense. The Samsung Series 7 is the tablet Microsoft chose for their developer release of Windows 8 at their BUILD conference in September. That makes it the actual model developers are using to build their Windows 8 applications. In addition to offering the proper Microsoft-recommended screen ratio and resolution, this developer version also features all the extra sensors (accelerometer, inclinometer, gyrometer, compass, ambient-light, orientation, and simple orientation) Windows 8 tablets are expected to provide. That modified Series 7 is essentially the prototype for all Windows 8 slates to follow. Putting it into production is simple sound logic.

Of course, it’s not necessarily an ideal move either. The Series 7 doesn’t match the iPad generation of tablets in the weight category, nor does it have an ARM-based processor. I doubt the modifications on the Windows 8 version will take it that far, but who knows? I only hope they keep the Wacom dual digitizer for pen + touch.