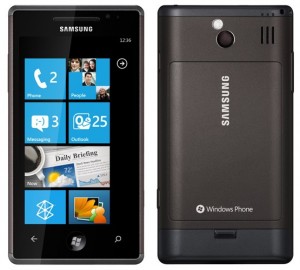 For those of you that have been waiting to hear about Samsung-made Windows Phone 7.5 Mango handsets, you’ll be happy to know that a potential candidate for the first Samsung Mango device has been outed by HDBlog.

Unfortunately, that’s where your happiness is probably going to turn into downright anger because it appears that this phone, dubbed the Samsung Omnia W, is going to be a mere refresh of Samsung’s previous Omnia device, the Omnia 7.

Samsung GT-i8350 aka Samsung Omnia W will likely be coming out October which means that it’s a prime candidate to be the first Samsung Mango device. Specs are unfortunately pretty last-gen with the phone purportedly being host to a 1GHz processor, 3.7-inch WVGA screen, Bluetooth, GPS, 512MB of RAM, and a 5MP rear camera.

In other words, a phone that many of you will be taking a rain check on.

Now, it’s entirely possible that Samsung and Microsoft will be releasing another device, hopefully one styled after the Samsung Galaxy S II, but it’s also possible that this will be Samsung’s Windows Phone 7.5 launch device and quite frankly, I don’t think a refresh is going to cut it.

What about you guys? Interested in a Mango-powered Omnia 7 refresh?