According to the latest report from Canaccord Genuity, analyst Michael Walkley says that Samsung’s flagship Galaxy S III Android smartphone is now the best selling smartphone in the U.S. on three of the four largest national carriers. The Galaxy S III now is beating sales of Apple’s current iPhone 4S models on Verizon Wireless, Sprint, and T-Mobile, with the former two carriers also offering the iPhone 4 and 4S while the latter carrier only offers Android. Walkley says that the iPhone still leads sales on AT&T Mobility. 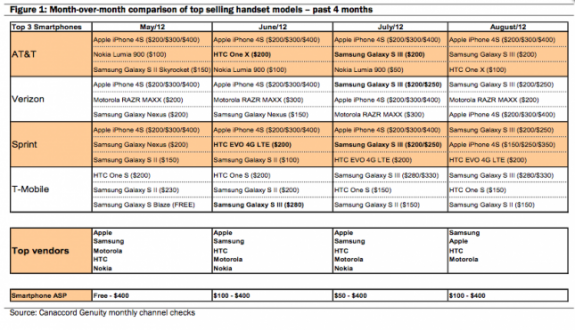 However, Walkley says that once Apple refreshes the iPhone lineup with its forthcoming iPhone 5, the Apple smartphone will once again become the best selling handset at these carriers. T-Mobile again will be left without an iPhone in its lineup.

Walkley believes that a new form factor along with improved 4G LTE speeds for connecting to mobile broadband networks will bolster Apple’s market share once it debuts the iPhone 5.

Walkley’s report was posted on BGR.

While Apple and Samsung continue to captivate American customers, other smartphone manufacturers have not been so lucky. The Nokia Lumia 900, available on AT&T, suffered declining sales in August. HTC and RIM continue to lose market share in the competitive space.