Samsung introduced the Galaxy Note II to a crowded auditorium in Berlin with a magic theme. Samsung played a video introduction to the Galaxy Note II after warming up the crowd with a live magician who threw cards around the aisle and fooled onlookers with sleight of hand.

The Galaxy Note II intro video features a magician’s hands, with his head cropped out of the frame. It is very similar to HP’s commercials from a few years back.

The magician begins the video by flipping through a blank paper notebook. Colored ping-pong balls magically appear in his hands, which he quickly tosses into his top hat, followed by an ink pen. He then throws the notebook into the hat before flipping the hat over. Flower petals float out of the hat, followed by streaks of light. The Galaxy Note II floats out of the hat and flys across the screen. The device’s name and the included S Pen splash next to the Galaxy Note II.

The video doesn’t actually tell us very much about the Galaxy Note II, but the video should be enough to piqué phablet buyers’ interest. The video isn’t available on the company’s Web site, YouTube channel or Facebook page quite yet. We expect Samsung to promote this video through its marketing channels leading up tot the Galaxy Note II’s official launch,which will be sometime in October. 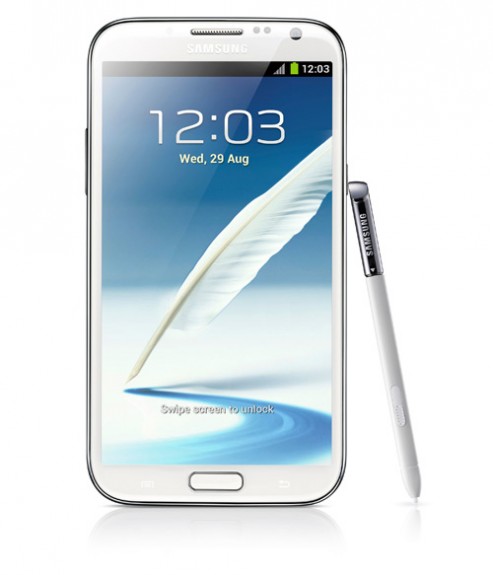 The Samsung Galaxy Note II features a 5.5″ Super AMOLED display, Android 4.1 (Jelly Bean) and apps optimized for pen input. The device is geared towards those that value large displays and an all-in-one device more than portability.

Samsung has not announced exact availability dates or wireless partners quite yet. U.S. consumers interested in the Galaxy Note II can sign up for availability alerts at Samsung.com.

The Galaxy Note II was the only Android phone Samsung announced at IFA 2012, but it wasn’t the only Android device. The company also introduced the Galaxy Camera, a point-and-shoot camera loaded with a 16 megapixel sensor, 4.8″ display and Android 4.1. The camera is the first Android camera with mobile networking baked in. You can learn more about the Galaxy Camera and see sample photos here.