Samsung is updating its new LPDDR4 Mobile DRAM technology, and this should give its premium high end mobile devices, including phones and tablets in the Galaxy S and Galaxy Note ranges, a competitive edge when compared to more traditional PC systems that run Microsoft’s Windows ecosystem. Not only does the new LPDDR4 RAM offer mobile devices, when coupled with next-generation 64-bit ARM processors, the stacked these LPDDR4 chips can offer 4 GB of RAM to mobile devices.

Given that Windows systems start at 2 GB of RAM and many offer 4 GB with the few high-end systems offer 8 GB of RAM. 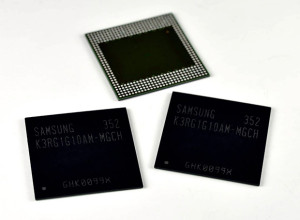 RAM is beneficial for multitasking so more RAM would allow systems–both Android and Windows–to run more apps and programs simultaneously without slowdowns. Currently, high-end devices from Samsung’s Android lineup, including the Samsung Galaxy Note 3, tops out at 3 GB of RAM, a limit of the current 32-bit processors that Samsung employs. As Samsung moves into 64-bit computing for 2014, these new mobile RAM chips will allow Samsung to offer more RAM to power more multitasking capabilities.

According to a post on Sammy Hub, these RAM chips that Samsung has announced are the first 8Gb chip for the industry and offer 1 GB of RAM each. Stacked together, the 8Gb mobile DRAM will offer a maximum of 4 GB when combined.

The chips will also offer faster speeds as well. Speeds are said to be double of what the LPDDR3 RAM offers while consuming 40 percent less power.

This translate to more powerful multitasking Android devices in the post-PC computing era that promise better battery life while allowing users to juggle more tasks while on the go.

For Microsoft, these new chips will allow Samsung to offer more for its Android-based devices, which could over time present a threat to the dominant Windows ecosystem. With expanded simultaneous multitasking through Samsung’s Multi Windows View as well as the new capabilities offered through the Pen Windows on the Galaxy Note 3’s Air Command menu, Samsung’s Galaxy Note 3 and Galaxy Note 10.1 2014 Edition are able to open multiple windows simultaneously, a feature that has often been reserved for bulkier, more expensive PCs running Windows.

Additionally, with some of the biggest Windows stalwarts–names like HP, Dell, Lenovo, Asus, and others–now also releasing Android-based systems, this could overtime begin to erode at Microsoft’s dominance.

In addition to Android, Samsung could also potentially use these RAM chips on its Tizen-based devices.