As the wearable computing market is gaining momentum, Samsung is already planning for its ‘next big thing‘ in that sector. The company already has a wearable wristwatch that connects to select Galaxy phones in the form of the Galaxy Gear, and though the smartwatch was met with a lukewarm reception Samsung is still bullish on this emerging market and now, according to the company’s timeline, we’re seeing what Samsung is envisioning for the wearable computing world for 2015 and beyond.

In terms of design, Samsung’s plans will start with devices with a curved shape. This will pave way for devices that can bend, similar to the Galaxy Round smartphone. Eventually, foldable devices will offer the most versatility and flexibility. 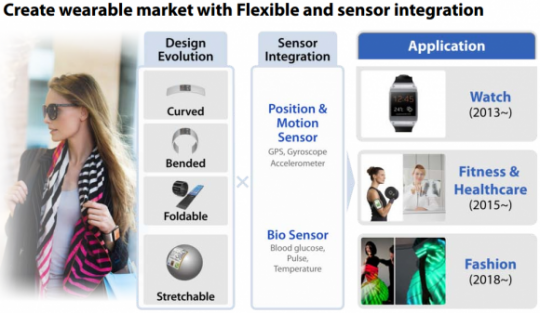 Eventually Samsung will want devices that not only will fold, but can be stretched, according to a slide posted on Slash Gear.

When these devices are combined with additional sensors, the wearables will become more intelligent and would be able to track and record more information. From basic GPS, gyroscope, and positioning sensors today, Samsung is also looking to expand to bio sensors that could track heartrate, pulse, temperature, blood sugar, and more. This isn’t the first time that we’ve heard of Samsung wanting to focus on the health and fitness market. When the Galaxy S4 was released earlier in the year, Samsung had announced a number of fitness accessories for that phone, but the company had subsequently decided to postpone the release and instead focused its efforts on the Gear.

Essentially, what Samsung is looking to do is to expand from the Galaxy Gear watch that was released this year alongside the Samsung Galaxy Note 3 to encompass devices that can be used for fitness and healthcare by 2015 and eventually by 2018 bring wearables mainstream into general clothing and fashion.