Samsung’s Series 7 Slate PC is being handed out at Microsoft’s Build conference today, but I had a chance to play with the hardware a couple of weeks ago at IFA 2011 and it isn’t anywhere close to being ready to compete with the iPad and its Android counterparts.

All the chatter around Microsoft’s next tablet effort is around the Windows 8 operating system. The Samsung Series 7 Slate PC might look pretty in pictures, but it needs to go on a diet before it excites those used to using an iPad 2 or Android tablet.

The Series 7 Slate PC is huge compared to Android Tablets and the iPad. Its 11.6″ display is bordered by an almost 1″ black bezel. That might not sound too horrible, but its footprint is significantly larger than tablets such as the iPad 2 and Samsung Galaxy Tab 10.1. But that’s not the real problem. The real problem is that Sereis 7 Slate PC is almost 50% thicker than iPad 2. It also weighs almost 50% more than the iPad 2. 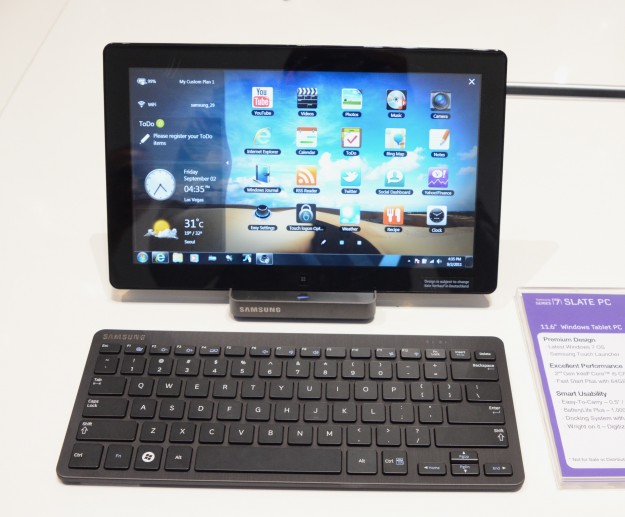 Samsung displayed the Series 7 Slate PC at IFA 2011 in Berlin, but didn’t call too much attention to it at its booth. The Series 7 Slate was running Windows 7 at IFA and Samsung’s app launcher. Of course the version being passed around Build today has an early version of Windows 8.

The other major problem is battery life. Samsung didn’t list battery life on its spec sheet, but we heard estimates in the six-hour range from Samsung reps. That’s pretty decent for a notebook, but nowhere close to the 10+ hours we’re used to seeing from from the iPad 2.

The Series 7 Slate PC is a ‘real’ Tablet PC, which is a great thing for tablet enthusiasts, but we’ve seen this movie before. Enthusiasts and niche markets look for features like Wacom digitizers. There’s simply no way an iPads or Android tablets can replace a Tablet PCs for individuals and organizations that are hooked on inking and Windows applications. But ‘real’ Tablet PCs are relatively expensive to build compared to tablets like the iPad. Consumers simply don’t buy Tablet PCs en masse.

Samsung’s Series 7 Slate isn’t anything all that new. You can go out today and buy a Motion Computing CL900 with a digitizer for $999, just like some professionals do. But Microsoft and it’s partners have a bigger market to address than the Tablet PC market these days.

If Microsoft wants a chunk of the iPad pie it’ll need to work with its partners to find a way to build slim devices that deliver 10+ hours of real-world battery life.