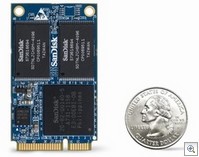 SanDisk is making some news on the Flash Storage front. The Vaulter Disk, a PCI Express Module that could enhance storage and operation on smaller mobile devices has just been announced and also taken the 2008 Best Innovation Award from Consumer Electronics Association.

Planned for 8GB and 16GB sizes, the Vaulter will work in conjunction with a device’s hard drive (if there is one) to provide a boost to performance and storage when using the PCI-Express based solution. Basically the idea is that often used files take advantage of the SSD while other files remain on the HD. SanDisk is planning on making the VaultDisk availble to OEMs next year.