If the battery in a USB-powered device falls short, a good battery backup like the Satechi 10000 mAh Portable Energy Station can get the device through the day. In fact, it lasts through a couple of days or longer for some devices. It comes at a bargain price with plenty of attachments to charge various gadgets.

I tested the Satechi 10000 mAh Portable Energy Station by charging up my Samsung Galaxy Note to 100 percent and charging the Satechi to 100 percent. I plugged my Note into the Satechi and then used it heavily. With the Note’s battery and the Satechi’s battery my phone lasted for over 30 hours. My Note normally lasts 6-8 hours by itself, so the Satechi gave me another 22 hours of battery life. That’s saying something since few charging solutions can charge the Note when used the way I normally use it.

I play video for a few hours with the Wi-Fi and Bluetooth radios turned on and the GPS tracking my position. With all of those, I’m lucky if I can find a charger that keeps it at the same battery level. Most of the time the Note slowly drains its battery even when tethered to my car outlet.

The 1000 mAh battery lasts and gives me a good powerful charging port. It comes with three USB ports. The mini-USB port charges the battery while the other normal sized USB ports give me a high-powered 5V 2A on the left and 5V 1A on the right. The left port charges my iPad without any trouble and the right port charges an iPhone or other smaller smartphones. I plugged my Note into the 2A port to get a healthy charge even under the heavy use described above. The lower powered port doesn’t charge my iPad or the Note while in use, but will trickle enough juice to charge them while not in use.

Next to the mini-USB port there’s a button that turns the battery on and off. On top of the battery Satechi put the LED charge status indicators. It has 5 lights representing 20 percent each. 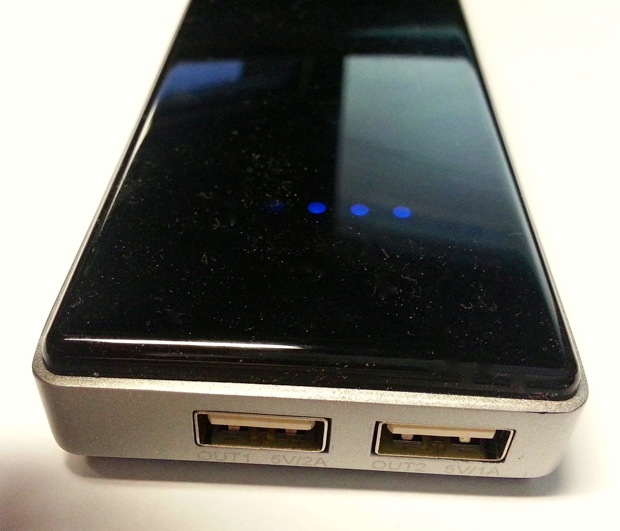 Satechi includes in the package seven charging connectors. Use one to connect to one of the charging ports on the battery. Connect one of the other six connectors to the other end of that seventh cable and charge one of a number of other devices, including a 30-pin iOS, a mini-USB, a micro-USB, and three other ports for various phones or devices.

The Satechi 1000 mAh Portable Energy Station does a great job and powers the devices I hooked up a long time. It’s my go to battery backup replacing the battery case I used on my iPhone or iPad in the past. With a long enough cable I put the battery in my pocket and never felt encumbered by the battery as I plugged it into my phone.

For people who need extra juice while on the go to charge and power their portable devices, the Satechi 10000 mAh Portable Energy Station is the battery to get. Amazon sells it for just $59.99. They come in a smaller mAh size for $20 less, but at this price I’d get this one.