The Satechi Wireless Mini Router Repeater enhances a local Wi-Fi network by letting users set up the device as a wireless router, a network bridge, an extender, a repeater or a client. Setting up the Satechi Wireless Mini Router Repeater doesn’t take much time or technical skill, making it a great solution for anyone willing to read some basic instructions.

We primarily wanted to use the small Satechi Wireless Mini Router Repeater to extend a weak Wi-Fi network in an upstairs bedroom at the far corner of the house. The Netgear WiFi Booster reviewed earlier here at GottaBeMobile didn’t extend the signal far enough, and it dropped the connection to the main Wi-Fi router, making it nearly useless in our setting. The Satechi solved this problem. 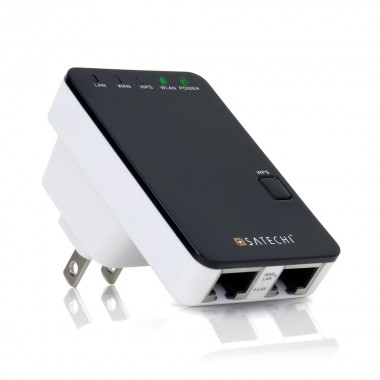 Design and Function of the Satechi Wireless Mini Router Repeater

The Satechi Wireless Mini Router Repeater is small. So small it’s basically the size of the power supply that most traditional wireless routers use. Instead of just serving as a power supply, it holds the entire router. The device measures less than 3 inches long.

On the bottom of the Satechi router there are a couple of Ethernet ports. One connects to a Cable or DSL modem when used as a Wi-Fi router, or connects it to another network router directly if you want to add Wi-Fi to an existed wired-only network. Some may want to connect to a Wi-Fi router to use it in bridge mode. This creates a second Wi-Fi network, which could be used as a guest network.

The Satechi works with 802.11 b/g/n networks. It uses WPA and WPA2 security. When the user connects it as a repeater to extend the existing wireless internet, the device takes the same SSID as the main router and users won’t know they’re connecting through the repeater instead of the primary router.

We used the second port to connect up a Mac to configure the device. The router also uses this port to connect to devices like a gaming system or set-top box so users can connect them to Wi-Fi in client mode if the device doesn’t include built-in Wi-Fi.

Configuration takes less than fifteen minutes. Follow the barebones directions carefully. We failed the first time we hooked up the device. The second attempt worked perfectly.

Once configured, we plugged it into a surge protector and connected the Wi-Fi on multiple devices to it, testing the throughput and quality of connection. There were no problems, and now that room in the far corner of the house enjoys a solid Wi-Fi connection.

Satechi normally sells the router for about $50 but now it’s on sale for just $39.99, although it’s out of stock. Sign up to get a notice when they get one in stock. It’s worth the wait and the price. We’re told they should get some in April.