When thought leaders try to define a era or age they play a leading role in, they typically get in themselves into trouble. When you’re bouncing around in the rapids of a rampaging river about the only thing you can be sure of is that you’re getting wet and you have to make sure you can come up for air. Microsoft’s still new CEO, Satya Nadella kicked off the current Code Conference run by Re/Code with a statement that might make some scratch their heads as they look around the technology landscape today. Nadella’s big statement was this: “I think we’re at the very beginning of what I describe as the post-post-PC era.” 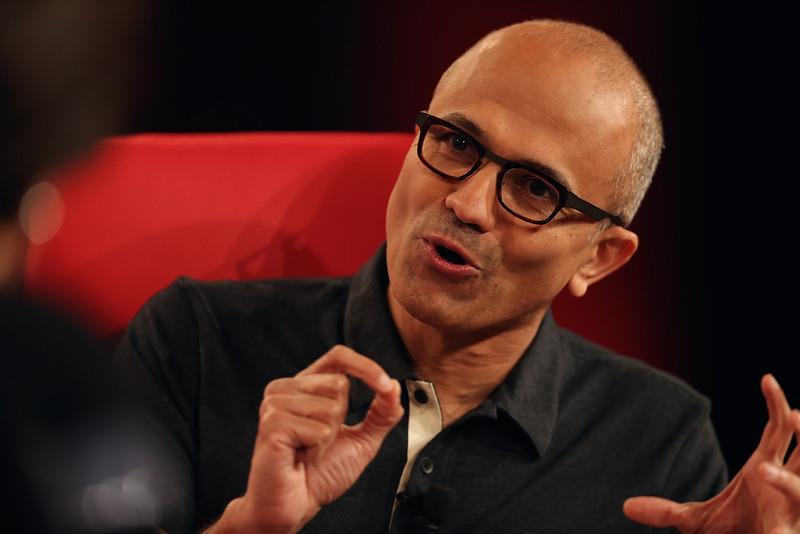 So, just when we thought we were getting comfortable with the post-PC era we’re now entering the age after that. In short, Nadella is saying he wishes Microsoft was Google and making Chromebooks.

Steve Jobs tried to define the post-PC era when the iPad was introduced by trying to find the middle ground between the computers we were married to and the smartphones that we were having new love affairs with. You might remember his description that PCs were the trucks that some would always need, but for many a smaller car was sufficient to get from place to place.

At the time, that was a lot clearer definition of where things stood with mobile taking over and traditional PCs being left in some households to gather dust on their keyboards.

Nadella’s head-scratching era defining statement isn’t quite so clear. So much so that he took to Twitter to try and explain his points. 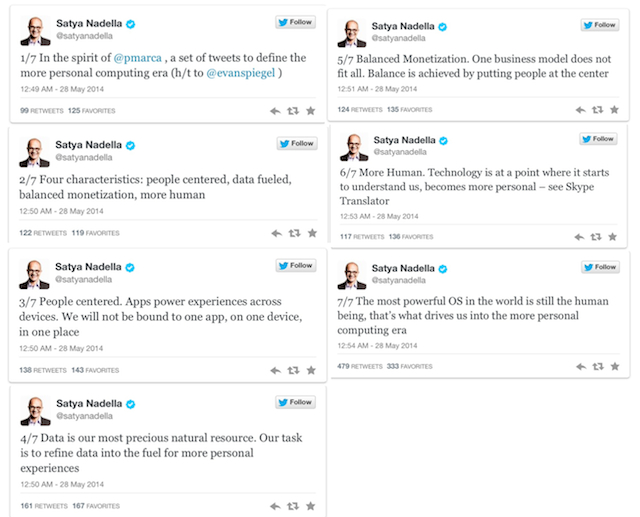 What Nadella is trying to lay out is a future when devices become increasingly irrelevant as we focus on a people centered, data focused, balanced monetization of a world full of humans to create a more personal computing era. Clear?

First the statement in Nadella’s fourth tweet that data is our most “precious natural resource” is a bit scary in this day and age when trust has been shaken in governments and corporations that are hell bent on vacuuming up every bit of data they can. While we create data points as we interact with the world around us, connected or no, it is arguably the increasing ability to collect that data that is more precious than the actual data points. If a tree falls in the forest its a data point. If no one hears it, well…

Second, the conjunction between the usage of the words “people” and “humans” is just odd. Humans are messy. Data is not. Whatever the era of bits and bytes we’re in, those possibilities have been created by people, who one must assume are human. If what has been created so far needs to be further humanized it makes logical sense to remove barriers other humans erected. But the deeper we dive into the post-PC era (or the post-post-PC) era with smaller, more mobile devices some argue we’re creating new barriers and becoming less cognizant of the human beings around us as we stare into our smaller screens.

Further, the most powerful OS, the human operating system in Nadella’s words, contains in its instruction set algorithms for greed, competition, and ego that would probably prohibit the development of a world where we aren’t bound to “one App, on one device, in one location.” It’s human nature to both create and erase borders whether they be on maps or in sharing high scores from the latest video game. Note that the experiences that now get close to Nadella’s utopian view (Evernote, Dropbox, etc…) are all third party experiences that are not tied to an operating system and/or hardware maker.

If the aim of the new era is to connect us more easily in measurable ways than Nadella may be right about entering into a post-post-PC age. But if he wants to continue to do so with people at the core on some measurable human scale, Microsoft and others need to start addressing the layers of issues the current models live within such as privacy, the ease of anonymity, and the false and fragile sense of security we all live and connect with. That’s not as sexy as a brand new shiny device, but it threatens the entire ecosystem more than not having a new device every year does.

The question of what devices we use is indeed largely irrelevant because those devices will increasingly be outdated at a faster pace than the “hardware” innovations that have come before them. Post-post-PC doesn’t mean hardware. It doesn’t mean what’s next beyond the tablet and the smartphone. In a way Nadella is saying Microsoft wants to be more like Google. The problem with that is the company he now runs is tethered to a revenue stream that demands complex hardware needed to run its complex software. In other words, Nadella wants a Chromebook.