Today Facebook introduced Save on Facebook, a new way for Facebook users to go back and fully explore interesting articles from the web, an iPhone or a device running Google’s Android operating system.

Announce today, Save on Facebook is part bookmarking service and part personal assistant. When users see an interesting video, television show, album or just about anything else on their timeline, they can decide to save it for consumption later. Instead of staying on the Facebook app that the user is on, Facebook syncs any and all saves so that users can access saved content on a different device that also has access to Facebook. 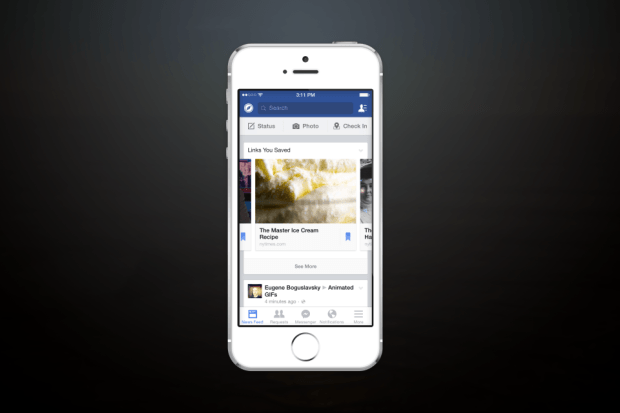 Once iPhone, iPad, Android and web Facebook users come across an article they like, they can file it away by category, making it that much more easier to find later on. To ensure that users remember to read things that are saved on, Facebook users can set a reminder for later on. Once an item is saved users can archive or share it with their Facebook friends and family.

For Facebook users, the temptation to click on a link and instantly and read about the latest news stories or check out local eateries, has always been strong. Unfortunately, not clicking on a link at that particular moment could leave users unable to find that interesting thing once they’re finally at home and away from the office. Save on Facebook solves this problem, within the confines of Facebook, of course.

The feature should come in handy. Every day users share tons of content on Facebook. There are news articles about the latest iPhones and recipes for what could be a new family favorite. Facebook users who take advantage of Save on Facebook are cutting out the middle-man, there’s no longer a need to open a web page in the browser and bookmark it for later.

Of course, allowing users to save interesting this on Facebook is also a win for Facebook. There are likely millions of users who use Facebook as their main way of finding interesting content. By taking away the need to leave their app, Facebook should be able to keep users in its apps even longer. It doesn’t hurt that saves might provide an even more accurate profile of each Facebook user’s interest. The more comprehensive a profile Facebook has, the better it’s able to tailor ads and experiences to specific users.

Today, we have more information at our finger tips than ever. That our friends are able to instantly catapult something to the top of our reading list has added to the sense that there are so many interesting things on the internet that we need tools like Save on Facebook to keep track of them all.

Apple recently added a reading mode and the ability to save articles for reading later to its iPhone and iPad operating system. Microsoft’s Windows 8.1 operating system includes a new Reading List app so that users can save interesting articles for later on. That app is also available on Windows Phone and includes category filing too. That Microsoft has its own tool for bookmarking interesting things is definitely a good thing. Facebook for Windows Phone and Facebook for Windows aren’t actually Facebook apps in the sense that they’re made by Facebook. Microsoft maintains them, which is probably why Facebook didn’t announce plans to introduce saving to either of those apps.

Facebook is remaining quiet about an exact rollout out Saves for Facebook on iPhone and Facebook on Android. Users can expect the feature to arrive “over the next few days” for each of the company’s apps. It should start appearing on the web sometime soon too.