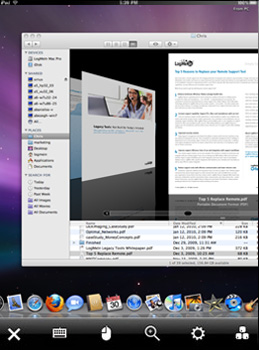 For some time there have been ways to remote into a computer or a network and get some work done when you aren’t sitting at the computer you need. So that’s nothing new. Yesterday though I had an experience where I needed to do just that, but all I had with me was the iPad.

Well, I shouldn’t say “all I had with me”. I had the LogMeIn Ignition app installed on the iPad and in this instance it proved to be a time saver. I have been crazy busy with contracts, grant applications and a ton of work that all requires lots of documents flying to and from. Typically, I use DropBox to store these documents as I’m working on them so I have access to them anywhere. That system works OK, but still with limitations, unless, like an idiot, I forget to put the document in question into the DropBox folder.

The idiot part happened yesterday. I headed out late in the day for a path that would take me to several meetings and then home. Midway along the path I got an email saying that the recipient hadn’t received the correct document that I thought I had sent. I was confused because I distinctly remember saving the file with a new name, but obviously not to the DropBox location.

So, I whipped out the Sprint MiFi card, fired up LogMeIn Ignition on the iPad, and discovered the file in question was sitting there on the desktop pointing a finger right at me showing me the error of my ways. I fired up GMail remotely on the desktop, attached the file to an email and within about 10 minutes all was right with the world.

LogMeIn works very well for this kind of situation, and there are other apps that offer similar functionality. LogMeIn’s cursor control leaves me wanting more though, and I’m glad the file was on the desktop and I didn’t have to go searching for it. It takes some adjustment to move the remote cursor to exactly where you want it to execute commands and mouse clicks. But that said, I’m glad I made the investment in the LogMeIn Ignition app and service. (The App sets you back $29.99.)