Saying Farewell to the HP 2133 Mini-Note 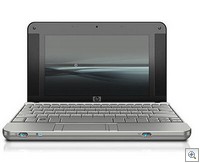 Later today the pre-production evaluation HP 2133 Mini-Note gets packed up and returned to HP, thus ending my evaluation of this intriguing little entry into the ultra-portable or ultra-low cost PC market. Here are some final thoughts I’ve gathered. Keep in mind, I’m evaluating a pre-production model, so some of my experiences may be different from what you might experience with a shipping model.

Those are some final thoughts from my limited perspective. Your reactions may be entirely different. Keep in mind that the HP 2133 Mini-Note is highly configurable (or soon will be). You’ll be able to choose operating systems, hard drive size, speed, and type, and other options. HP has created a device that will appeal to many because of its size and price point. That appeal will depend a great deal on the usage model and expectations. While HP’s first market is the education sector, I think we’ll see quite a few of these in the hands of mobile professionals (their declared secondary market) as well. If you’re not looking for good, solid media playback, it could serve very well as a companion device.

Does my wife, Thomasin, want to buy one? I’ve been asked that question quite a bit since she did the InkShow. When I last checked with her, she said she wouldn’t mind it at all, but she’s content to stick with the Asus Eee PC for now. That “for now” part has me thinking we’ll be picking one up for her at some point in the future.

Make sure you check out the GBM InkShows on the HP 2133 Mini-Note.

Thomasin Takes on the HP 2133 Mini-Note