What’s in a name? Quite a bit when it comes to reporting on new devices, especially in the Tabletscape. (Anyone else remember when Lora Heiny shamed us all into making sure we blogged Tablet PC instead of just Tablet?) Yesterday news bounced around the gadget sites about the Getac V100 Rugged Tablet PC that we reported on back in May as if this was something new. Gizmodo headlined their post “Tough Laptop: Getec V100, Laughs in the Face of Danger.” 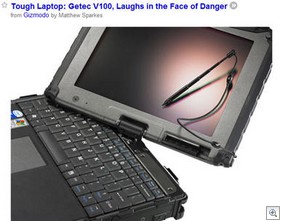