The Scosche FoldIO p1 was bar none the best iPad 1 case we could find scoring that award for 2010 at Notebooks.com. The Scosche folio p2 is an updated version that fixed the on thing we didn’t like about the original – the name. That is really the biggest difference for the new iPad 2 case since they continued with almost the exact same design with a couple of minor tweaks. Unfortunately that is not always a good thing in this case. 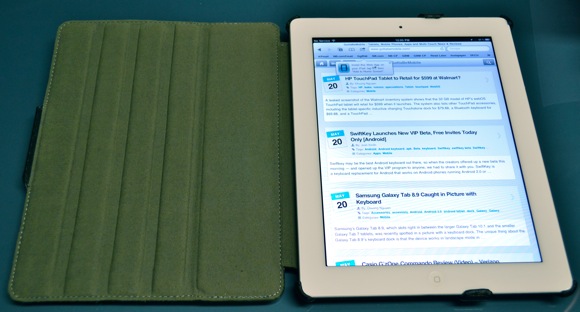 The Scosche folio p2 case looks almost exactly like the FoldIO p1 case. That’s the good part. We liked the professional black carbon fiber pattern and quality. Our only concern with the first review was that it might not hold up. We were wrong. A year later it is still in great shape and is the case we use to cover our original iPad to this day. That bodes well for the iPad 2 version. 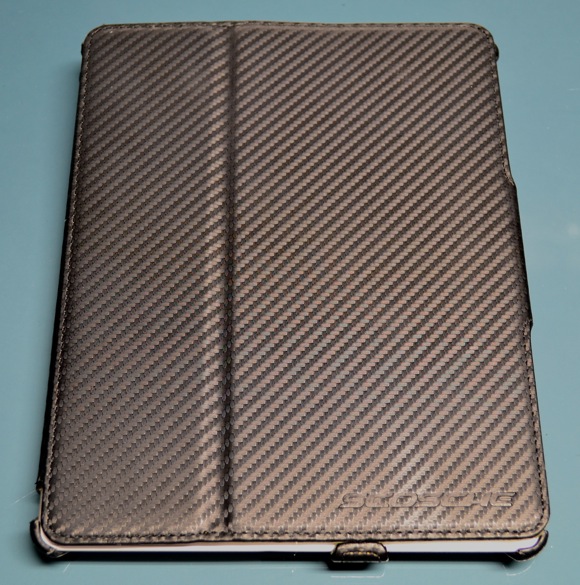 While the new case looks almost exactly like the old one, it comes in at $5 less. You don’t usually see updated accessories selling for less than the old one.

As a simple folio style case the Scosche folio p2 is great. It looks great, if you like a more conservative and professional look. It also protects the iPad 2 well. We also love how it doesn’t add a lot of bulk to the iPad 2. The thinner iPad 2 screams for a thin low-profile case. The Scosche folio p2 case is that, when compared to other folio cases. Any folio case is usually going to double the thickness of the iPad 2 at a minimum, but we’ve seen cases that triple it. This one doesn’t and we like that. Finally, it hugs your iPad. There is no fear that it will wiggle around in the case or fall out, as we have seen with others. All of this sounds great. So why is it unfortunate that they used the same basic design?

Any iPad 2 case without the automatic on/off feature that the Apple Smart Cover has, thanks to a special magnet in the cover, is not going to stay on our iPad 2 for long. That is now a bare minimum feature for us. Without it we feel like the case is just not all it could be. It is like having a Lamborghini with one temporary spare donut tire. The car looks beautiful and is amazingly valuable, but has one thing missing. With the Scosche folio p2 there is more than just one thing missing. 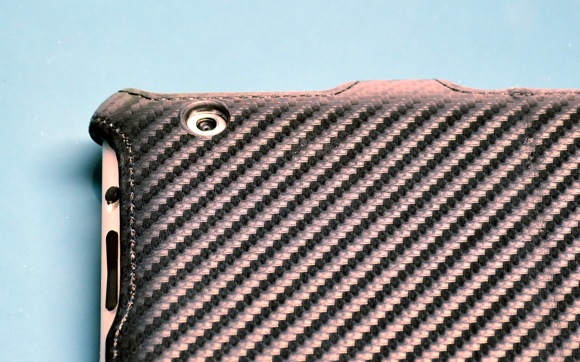 While the case has a hole for the camera on the back of the case, when you fold the cover of the folio case over the back to use like we usually do while in use the cover blocks the camera. Taking a picture with the iPad 2 with the cover open and not folded back is awkward. You have to hold the folio case open while taking the picture making your “camera” even bulkier than the iPad 2 already is. See our video for a demonstration of why this just doesn’t work. The reality is this is a weakness not just of this case but almost all folio style cases, so we can’t fault Scosche too much on this one thing. 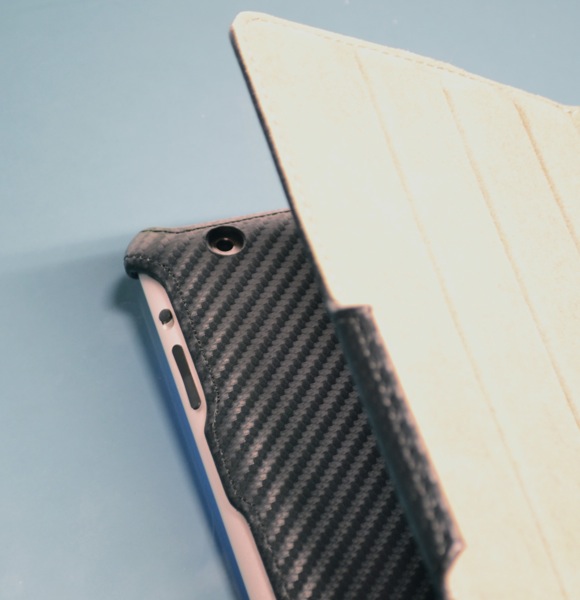 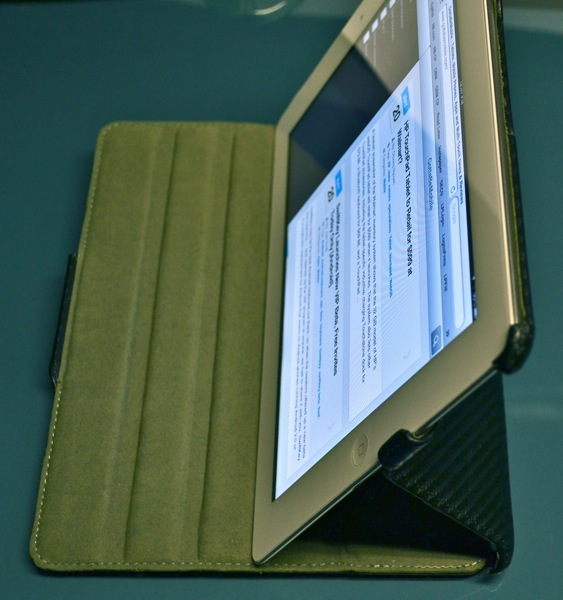 There are four grooves offering five potential angles – one angle for each groove plus letting the iPad rest flat offering a slight incline. The problem is the back of the iPad 2 is not the same shape as the iPad 1. Because of the rounded back edges the iPad 2 will not stay in three of the grooves. It slides out. With two of the grooves, the iPad 2 will stay so long as you don’t touch it at all. But hit pause a movie or swipe a picture and it slips out and falls flat. The groove closest to the outer edge of the case is entirely useless because the iPad 2 slips out of that groove no matter what you do. 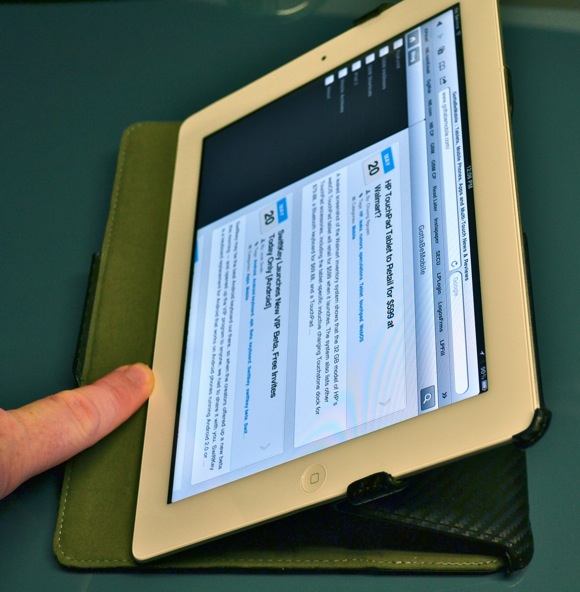 The last problem is the hook that holds the cover closed won’t hold it closed. This is not a real problem. In fact we wouldn’t mind if there was no hook at all. If you found that feature useful in the original foldIO p1 case, remember that it doesn’t work on this one.

As a simple folio case, we really like the Scosche folio p2 case. Its weaknesses amount to a disappointment. This case is so close to being a perfect follow-up to what we considered the best case for the iPad 1. Add a magnet and make the stand function work somehow, then we would be as excited about this update as we were about the iPad 2 update. With these weaknesses and it leaves us wanting more. 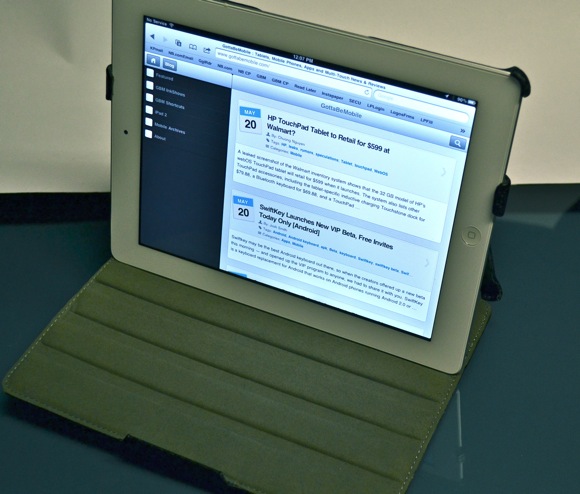 If you only want a folio case, at the price, this is the best one we’ve seen for the iPad 2. If you want an iPad 2 case the design of which that takes the best new features into account, keep looking. The Scosche folio p2 case is $44.99 direct from Scosche. 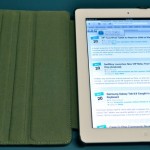 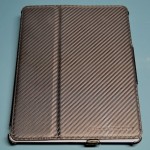 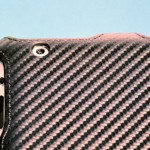 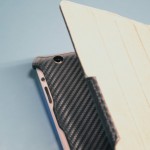 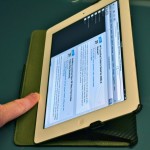 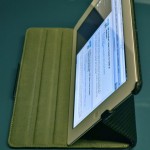 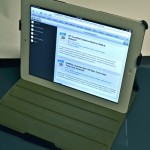