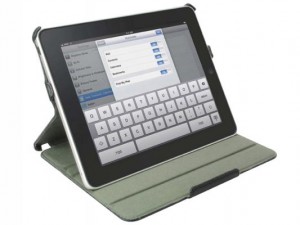 If you have an iPad you know the feeling. You buy a case. After installing it on the iPad for protection you quickly discover that it has its good and bad points. There are countless options out there, and countless more being introduced every day, especially in the run up to the Christmas holiday season. But that’s only natural given the millions of iPads that have been sold. Certainly choosing a case is a very personal thing, (as is how you use a Tablet/slate)  and it’s shame you can’t find enough in stores and try them on your iPad before purchasing.

I’ve tried a few mostly of the case/stand variety because I feel like if you are going to have case, it should double as a stand. My favorite so far has been the Macally Bookstand because it lacks the bulk of some other options, and its microfiber finish also serves to clean the screen when it is closed. That said, the Macally Bookstand does show wear and tear very easily, the exterior is tough to clean, and in order to get the case to serve as a multiple position stand, you do have to work the strap a bit more than I would like to secure it once you’re ready to stand up the iPad. I also like the easy way you can snap the iPad into the case or remove it.

Early on I tried the Incase Convertible Book Jacket. Though I like the way it worked as a stand (using indentations in the case cover to hold the base when propped up, I really didn’t like the bulk and found that the iPad slide around in the case. (I think the slipping issues were addressed in later versions.)

Scosche looks to have learned from those that have come before in creating The Scosche foldiO P1. At least for my tastes. I’ve ordered one of these cases and did so because it looks like it combines the best of the features I’ve described above, especially the surface texture that from what I’m reading will also serve as a screen cleaner. It also costs $49.99 which is on the low end of the price scale for iPad cases in general. We’ll have to wait and see.