The iPhone 7 Plus battery life lasts all day for many users, but heavy users might struggle to get through the day so the Scosche iPhone 7 Plus MagicMount PowerBank might help add some life to the phone. The magnetic aspect of the battery sets it apart from ordinary external batteries. Scosche sells them for the iPhone or iPad with a lightning connector or for other devices that charge through micro-USB or USB-C.

This review covers the iPhone version of the Scosche MagicMount PowerBank ($59.99) battery. It comes with a built-in Lightning cable. The MagicMount PowerBank houses a 4,000 mAh battery charging at 2.1 amps. That’s enough battery power to charge the iPhone 7 Plus nearly 2 times. It should charge the smaller iPhone 7 twice easily. The iPad will take up more power and likely won’t charge twice, but it should give you at least one full charge. 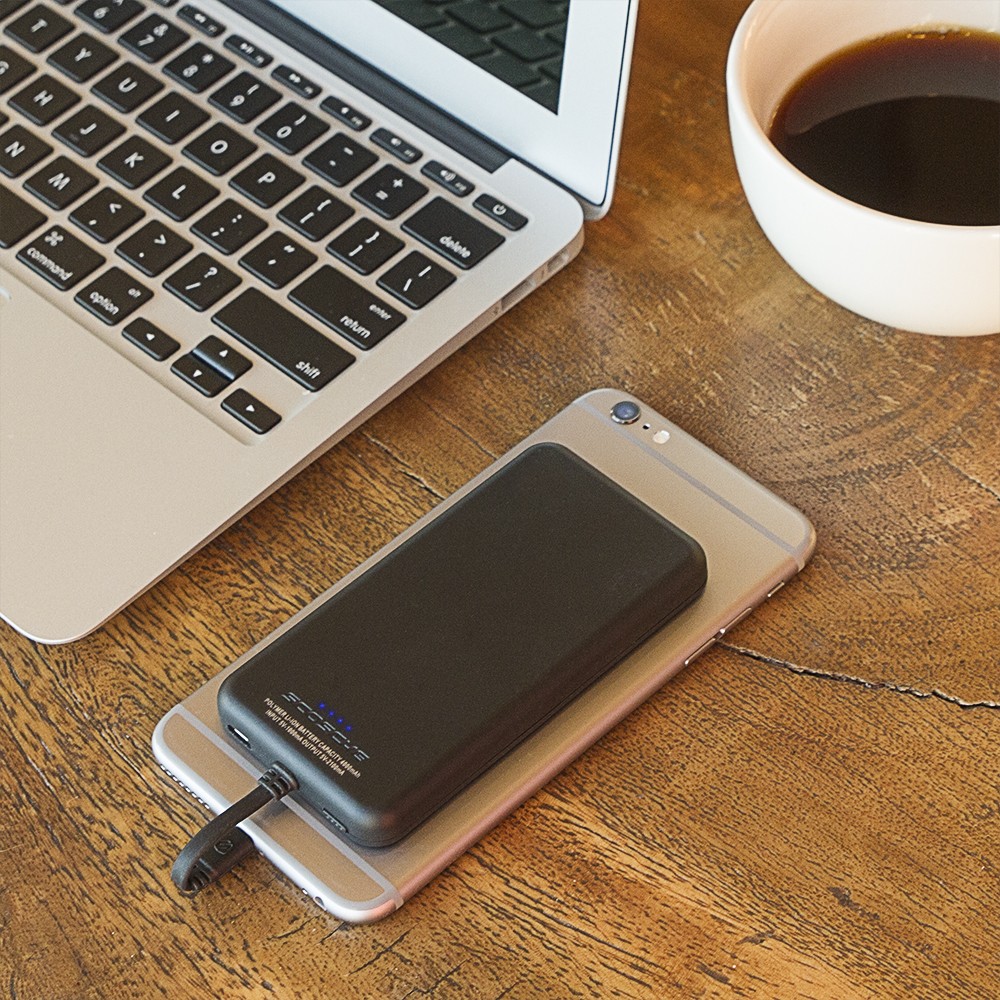 The package comes with the Scosche MagicMount PowerBank battery and a couple of adhesive-backed magnets. Remove the backing to show the sticky and fasten it to the phone. The PowerBank then fastens to the part stuck to the iPhone to hold the battery in place. It stays firmly in place until the user pulls it apart with some effort. 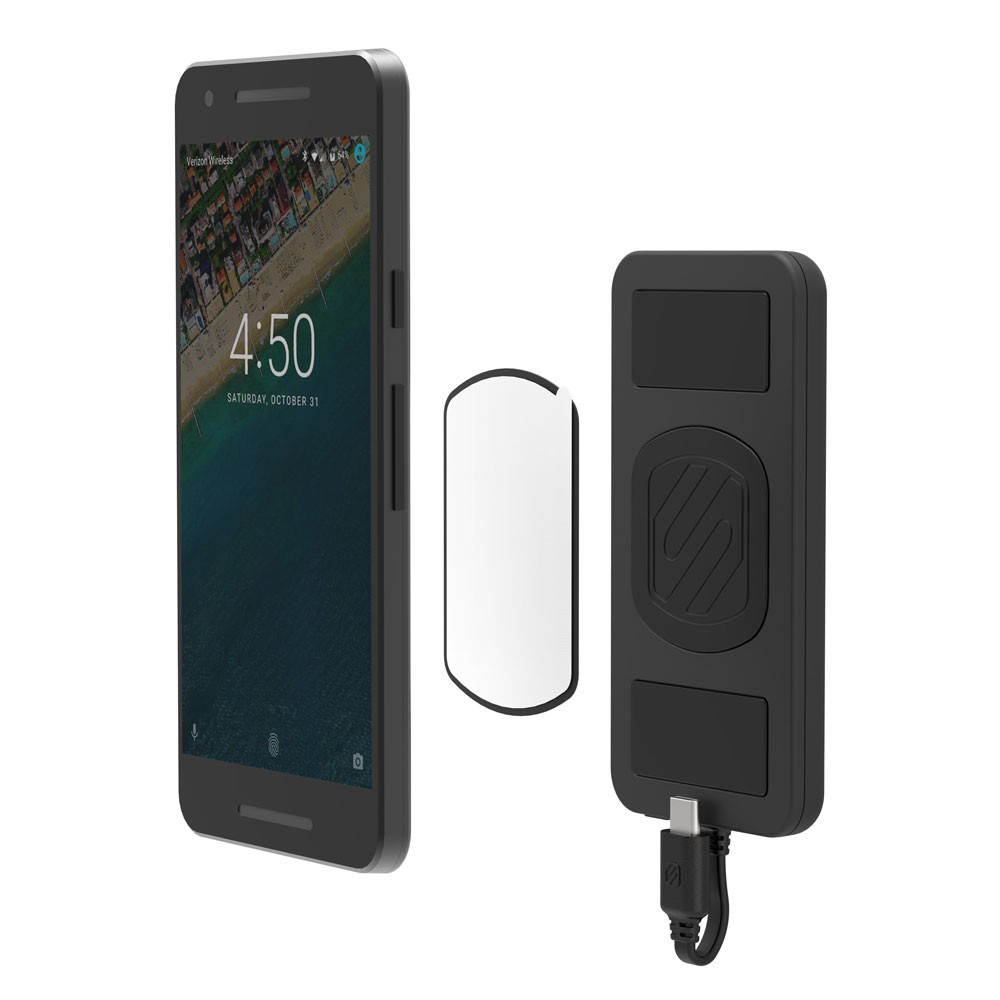 People who don’t feel comfortable sticking a magnet to their phone’s back with adhesive should get a case and stick the magnet to the case. However, I’ve stuck magnets to my phones and you can remove them and clean the adhesive that stays behind with rubbing alcohol. This won’t damage your phone, so long as you only use a tiny amount of alcohol on the cloth. 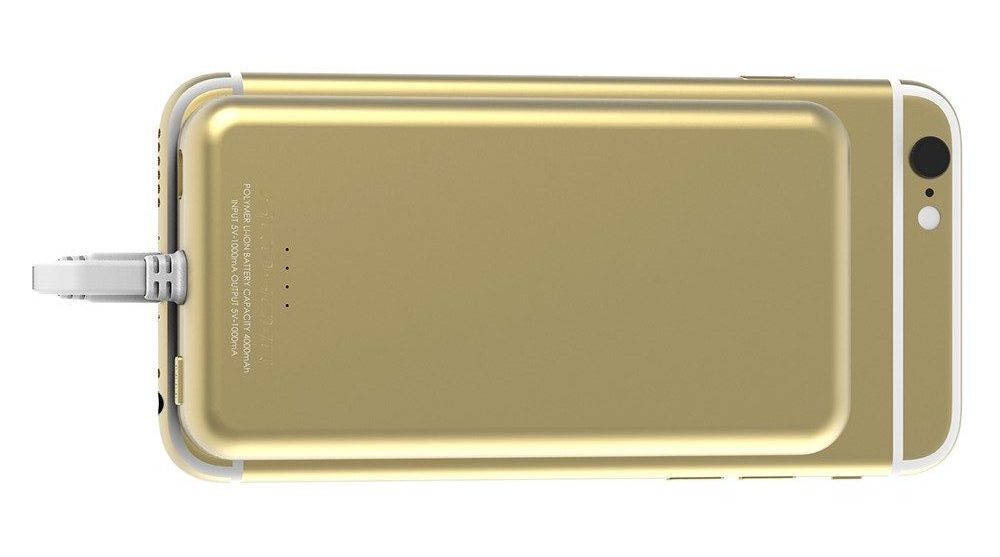 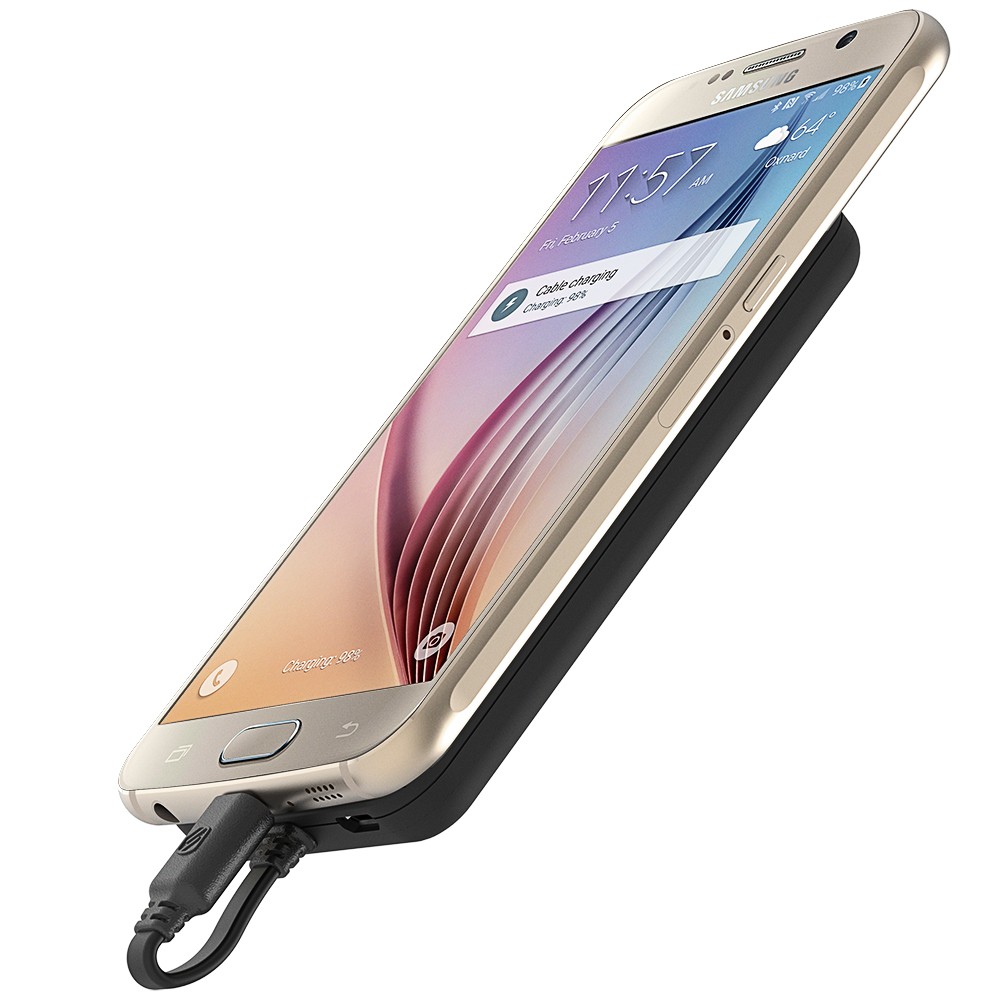 The PowerBank measures about the same thickness of the iPhone 7 Plus. It’s a couple of inches shorter and maybe an inch or so narrower. It weighs slightly less than the iPhone. The two together don’t feel too heavy to carry in your pocket.

The cable that connects to the iPhone sits next to a button that turns the battery on or off. LED indicators show the battery’s charge percentage. It also has a micro-USB input to charge up the battery. The package includes a USB charging cable that plugs into any USB port on your computer or an AC to USB adapter. 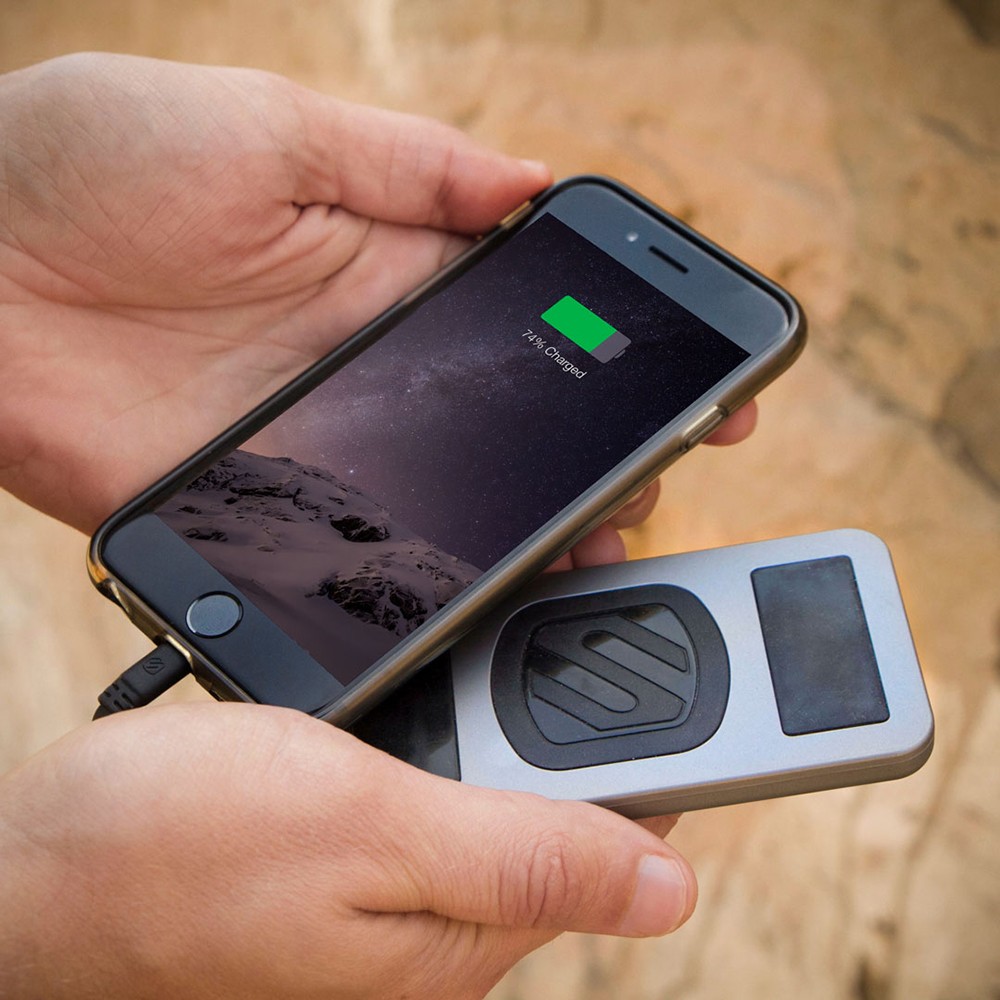 There are a couple of pads on the side that touches the phone. This keeps the battery from scratching the phone’s back. 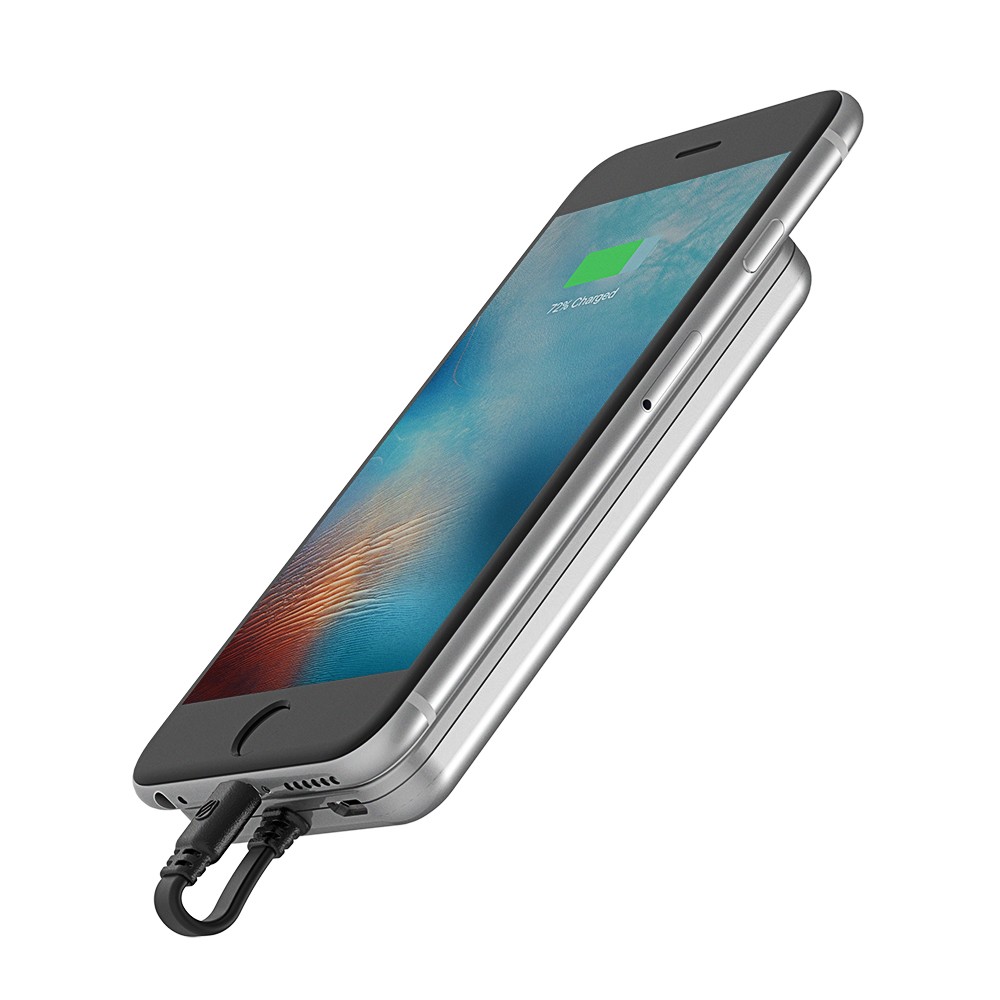 The Scosche MagicMount PowerBank works great. However, Scosche designed the cable to permanently connect to the battery’s housing instead of making it removable and interchangeable. Why not make the cable so that a user can switch the connector and use the battery with more than one kind of device? I carry an iPhone and have another tablet that charges using micro-USB. I wish I could buy new cables to plug into the battery and use it to charge up one phone and then charge up the tablet. 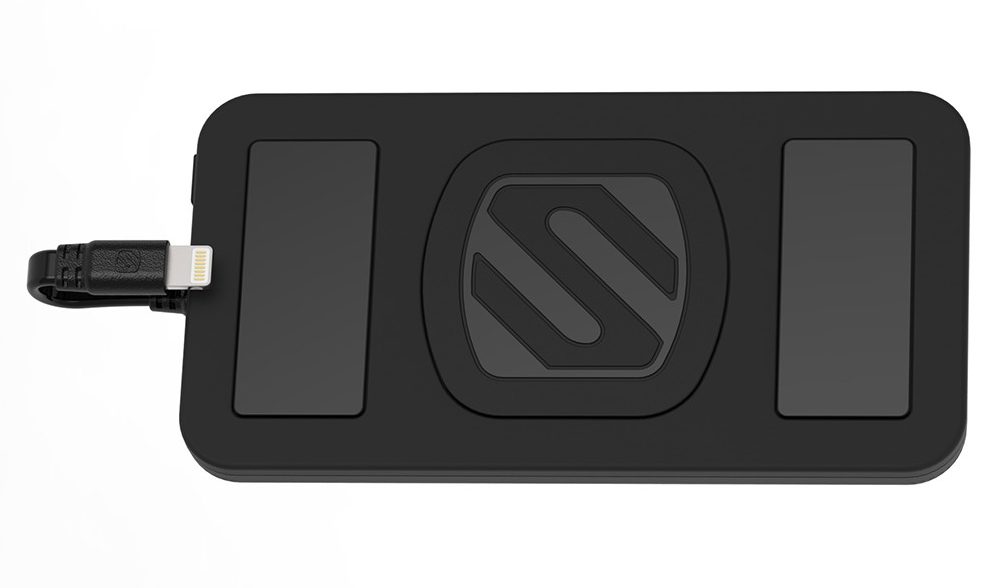 The Scosche MagicMount PowerBank works great. It’s convenient to carry it around compared to other external mobile battery devices. Many people like battery cases, but that’s problematic for a few reasons. First, you have to match it to  your phone. What if you upgrade your phone? You have to get a new battery case unless the new phone is the same shape and size.

Second, battery cases weigh more than typical cases. I don’t always need a battery case. The PowerBank is more convenient to carry in my computer bag and take it out only on those days when I need extra power or just at the end of a long work day when my phone starts running out of battery power.

The Scosche MagicMount PowerBank for iPhone with Lightning connector, for micro-USB or for Type C USB costs $59.99 direct from Scosche for the Lightning version and $49.99 for the other two. It’s a great solution to the battery problem despite the permanently fixed cable. Users can solve that problem with cable adapters for their other devices.