The holidays are coming and maybe you are planning on doing some entertaining. You’ll decorate the house with holiday trimmings and perhaps you’ll want to display some pictures of the family or other goings on in your life. For some, Tablets have replaced digital photo frames as a way of showing off your digital photos. Apple’s iPads used to give you one button access to a slide show from your lock screen but in iOS 7 that feature has been removed, though the button is still there. More on that in another post.

If you’re a Surface 2 owner (or a Surface Pro 2 owner) you can set up your Lock Screen to show off an animated  digital slide show and display it proudly when you’re entertaining, or just to entertain yourself. The Surface 2’s widescreen dimensions actually make for a very nice display as your photos cycle through. For photos that take up the entire screen there is even a slight Ken Burns zooming effect. While photo choices may look random, there is some behind the scenes algorithmic mixing and matching going on. If, for example, it’s November and you have photos from last Thanksgiving gathering, those photos will probably show up in your slide show.

Here’s how to set up a slide show on the Surface 2 lock screen:

First swipe in from the right to get to the Charms Menu. Then choose Settings. At the bottom of the Settings menu choose Change PC Settings. This brings you to the PC settings Windows. Choose PC and Devices. 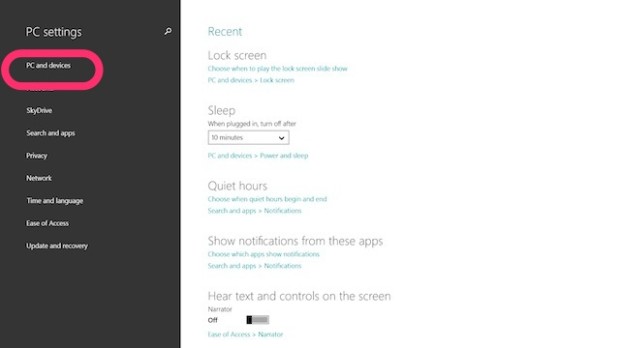 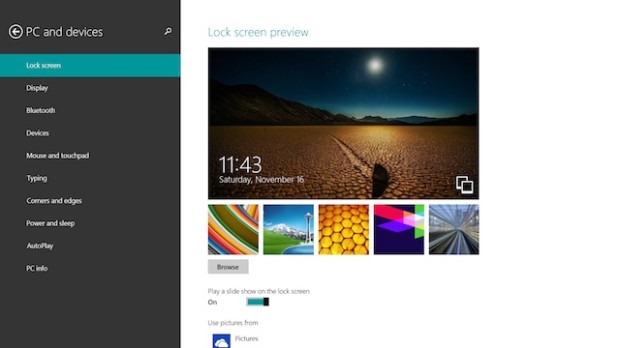 Here you are presented with a series of options in a windows called Lock Screen Options. Since we want to set up a slide show, toggle the switch to “on” below Play a side show on the lock screen. 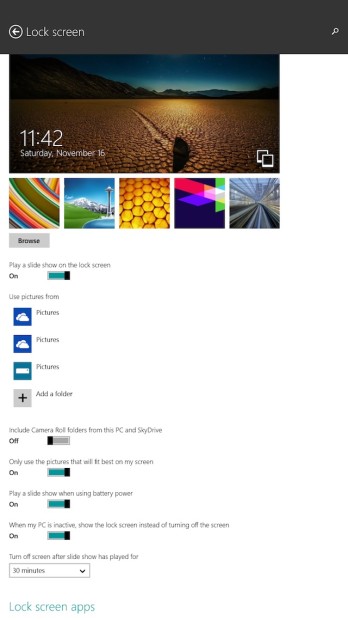 Immediately below that you will see Use pictures from. This allows you to pick which folders on your Surface or Skydrive account to pull pictures from.  If you need to add a new folder to search for pictures from, you can do that by hitting the plus button.

The next series of options include:

Only use the photos that will best fit on my screen. If you’ve stored some really odd sized photos in your collection you might not see them show up in your animated slide show.

When my PC is inactive, show the lock screen instead of turning off the screen. By default this is turned on and this is the control that turns your PC into a digital photo frame.

Below these options is a drop down menu that allows you to turn off the animated slide show after 30 minutes, 1 hour, 3 hours, or Don’t Turn Off. 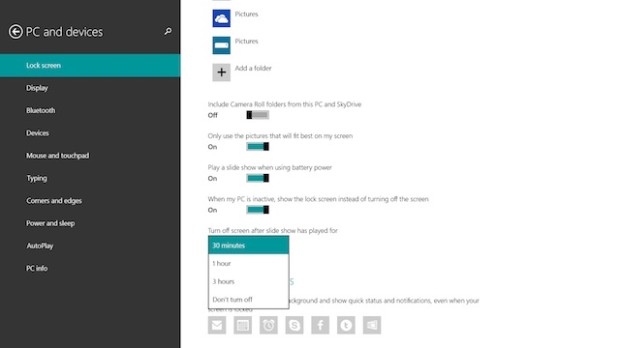 Options for duration of a slide show

Again, a pleasant way to discharge your battery is to set this to Don’t Turn Off.

Other GBM Posts about the Microsoft Surface 2 and Surface RT