How to Set Up Text Expansion in iOS 7

If you own any smartphone, then you probably do a lot of text messaging or writing emails. It’s pretty convenient to have all of that productivity in your pocket, but typing on a small keyboard with your thumbs can get pretty tiring after awhile. Like most people, I like to keep my emails and text messages short when using my phone, so my mobile correspondence can seem very brief and lazy.

However, there’s something called text expansion that can make your life a lot easier, and it helps out significantly, whether you need to type out a lengthy email while on the road, or if you’re just typing a quick text message to a friend or family member. However, before we show you how to set up text expansion, you first need to know what text expansion is. 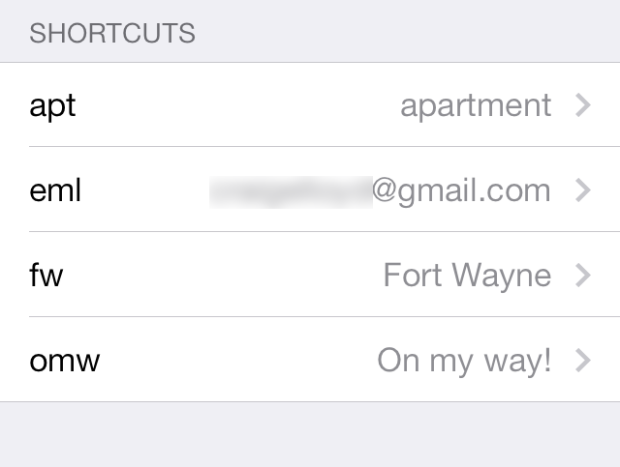 What is Text Expansion?

Put simply, text expansion allows you to type in an acronym or a keyword that then automatically expands into a longer phrase or word. For instance, you can set it up so that whenever you type in omw, it’ll automatically replace it with on my way so that you don’t have to type out that entire phrase.

You can also set up an acronym for canned responses. So if you get a lot of emails where you’re mostly replying with the same phrase all the time, this is where text expansion can come in handy; setting up idk as a keyword for a sentence like, I don’t know when I’ll be there exactly, but I’ll let you know as soon as I find out can be great when you don’t want to keep typing the same thing over and over again on your mobile device. 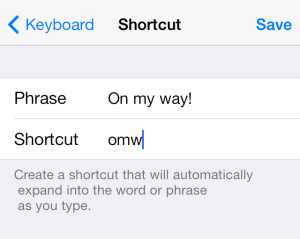 Setting Up Text Expansion in iOS 7

While you usually have to get third-party apps on Windows and OS X to use text expansion, iOS 7 comes with text expansion built in. Simply open up the Settings app and navigate to General > Keyboard and scroll down to the Shortcuts section. This is where you’ll set up text expansion phrases. You can see from the large photo at the top that I already have a few set up for words that I type in most often, including my email address, for which I use eml as the keyboard.

Tap on Add New Shortcut… to start setting up phrases. In the Phrase text box, type in the word or phrase that you want to pop up when you type in a short keyboard or abbreviation. Then, type in that keyword or abbreviation in the Shortcut text box. Once that’s done, tap on Save in the upper-right corner. You’re done!

To add another phrase, just repeat the above process until you have all of the words and phrases you want set up. Once you have more than few phrases set up, iOS will put all of them in an alphabetical list (similar to your Contacts list), where you’ll be able to scroll through them and find specific ones easily.