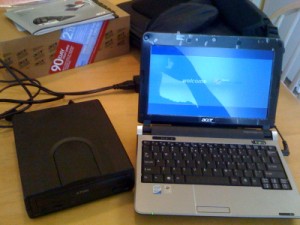 Acer Aspire next to my CD drive

Got my hands on an Acer Aspire netbook this Sunday, helping friends set it up for their daughter. Felt like a giant trying to work that tiny keyboard and 8.9″ screen (it’s barely bigger than my external CD burner), but for a ten year-old girl, it’s a winner.

One of the questions they asked before making the plunge was whether it would be fast enough. I hadn’t worked with this one before, but running the numbers, 1.6GHz Intel Atom processor and 1GB of memory, I felt confident telling them it would be faster than their current desktop (or my wife’s laptop). Sure enough, it’s a speedy little machine. Actually felt as snappy as my tablet with 1.6GHz Core 2 Duo and 4GB of memory.

Loaded it up with Firefox for web browsing, Gmail, calendar, and Google Docs; iTunes for her iPod shuffle; Picasa for photo management; AVG Free for security; Paint.NET for image editing; and OpenOffice.org for a local office suite (just in case of an Internet outage). With her Gmail account setup, I set up an unlisted web album for her via Picasa so she can share photos with family, and set up the Google Desktop sidebar with clock, scratch pad, photo album, battery meter, and wifi meter. Steered clear of any social networking stuff. Also made sure to turn on safe search in Google and parental controls in iTunes (and give her parents the necessary access). With the sidebar turning through photos and iTunes processing songs in the background, the web browsing experience was still  very swift, even when working in Google Docs.  I expect she’ll get a lot of use out of it.

I must say, the experience reminded me how unprepared Microsoft was for the netbook craze. Running Windows XP on this brand new machine, I couldn’t help but remember my first Tablet PC running XP on 833MHz P3 processor with 512MB memory. Raw numbers alone are double what I had, not counting the vast improvements in efficiency making this netbook many times faster than my old tablet. I can scarcely believe I thought my old machine was adequate, let alone good enough to convince me to embrace the form factor. Now, here I was, setting up a new netbook with the same OS four years later,  thinking that  the user would love it. I hope Microsoft gets their act together on netbooks with Windows 7. I like XP a lot, but I really don’t want to see it on new  computers two more years down the road.
Related Topics:AcerAcer AspireAspireNetbook