Sadly for many Shakespeare is an acquired taste. That’s not the case in my world as I happen to love the works of the Bard and have directed a few of his plays. Quite frankly, in my world view, we’d all be a little better off if we read a little Shakespeare now and then as just about any aspect of humanity, good or bad, that we face in today’s world we think might be original, the Bard covered in one way or another in his writings and illuminated them far better than our writers do today. 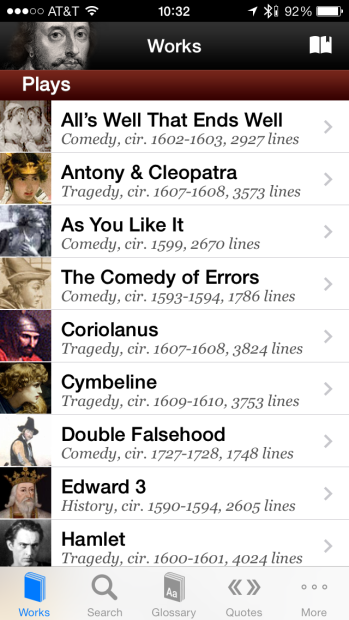 But this isn’t a post about Shakespeare. It’s about an App called Shakespeare Pro from Readdle. And the reason for the post is that the App is now free for iOS devices. It used to sell for $9.99. Shakespeare Pro contains all of the works of William Shakespeare, a glossary, the ability to take notes and share them, scene and character descriptions, bookmarks, and a host of other features.

Shakespeare Pro resides in a folder on all of my iOS devices called Reference. It’s there for a quick glance along with other important texts like The Bible, The US Constitution, a collection of the world’s political classics, a dictionary, a thesaurus and other texts I occasionally want to use to look things up when those in today’s world think they have come up with an original thought or idea. Typically they haven’t. Having the Complete Works of William Shakespeare and other reference texts I deem valuable with me at all times is one of the joys of owning a mobile device.

There are a number of Shakespeare collections and also Apps for individual plays available on iOS. Many of those cost money and are simply a repackaging of the play or plays. If you’re looking the complete works and some interesting background and other info, you can’t go wrong with Shakespeare Pro. If you’re looking to pick up a copy of a single play, don’t spend money on an App that just contains that play, get the entire collection for free and perhaps read some of the other plays. Who knows, you might learn something. I haven’t found a suitable alternative yet for Android devices although there are a number of Shakespeare Apps on that platform and plays can be acquired from Google Play.

Shakespeare Pro is available on the iTunes App Store for free.