It looks like Apple is planning some shelving units that it will employ at its retail partners–like Best Buy and Target–to host accessories for the rumored iPad Mini tablet. Newly leaked blueprint. According to Apple Insider, which obtained a copy of the leaked blueprint, it isn’t certain for which Apple retail partners these displays will go in. However, the design for the displays for the iPad Mini accessories look similar to other Apple designs for its Apple Mac-in-a-store concept where the Mac-maker is currently building mini Apple display areas inside existing retail stores. 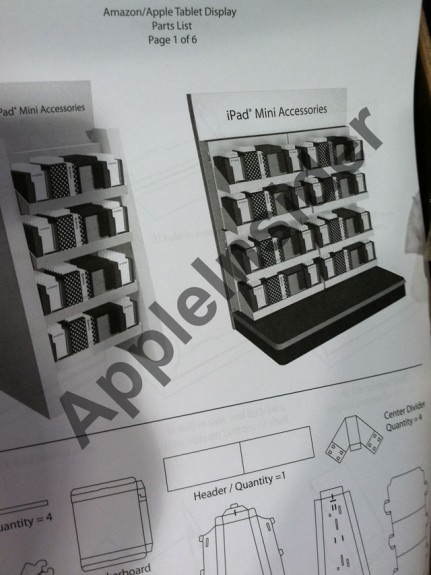 According to the latest leaked reports, Apple is scheduled to unveil its iPad Mini with a 7.85-inch display this month and the smaller sized tablet will begin going on sale at the end of the month. The tablet will mark the first time that Apple is deviating from the traditional 9.7-inch form factor that it has employed on three generations of iPad tablet. The iPad Mini will help Apple compete against smaller form factor Android tablets that offer high-end specs with affordable price tags–such as the Google Nexus 7 and the Amazon Kindle Fire HD slates.

While the blueprint does indicate the iPad Mini name, it’s still unclear if Apple will go with iPad Mini when it unveils the tablet.

In recent months, numerous leaks have emerged for the iPad Mini, including a number of third-party cases.