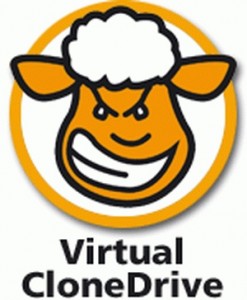 Among other problems I ran into (literally) over the weekend, my media PC suffered a failure to save application data, which wreaked havoc with my ability to watch online video and reduced my Wacom pen tablet to a mouse in pen form. Internet TV and Netflix in Windows Media Center kept crashing. Saved passwords for online sites wouldn’t populate. System restore did nothing, so before resorting to a full disk recovery, I did a re-install of Windows 7 upgrade made oh-so easy by SlySoft Virtual CloneDrive.

Despite the name, CloneDrive does not clone a drive. Rather it functions as a virtual optical drive, allowing ISO, BIN, and CCD files to be mounted as if they were on physical discs. Having updated my media PC to Windows 7 via download from Microsoft, I still had the ISO on my network drive. Microsoft does provide instruction on how to install ISO files to a USB flash drive or copy to DVD for installation. However, SlySoft Virtual CloneDrive can bypass that step and install straight from the ISO. Just double-clicked it to launch and let it fly. An hour or so later, I was back in business.

I know it sounds dangerous to re-install Windows via an ISO on a network drive, but once the process is started, all the installation files are moved locally. I even recall upgrading Windows from an ISO on the local drive once, but don’t hold me to that. (Obviously won’t work for fresh OS installs since CloneDrive has to already have been installed in Windows.) Works great with DVD movies too, such as a backup copy of my wedding video. Been using CloneDrive for years, starting with my first Tablet PC which had no optical drive, and have yet to run into a glitch. Best of all, it’s freeware.