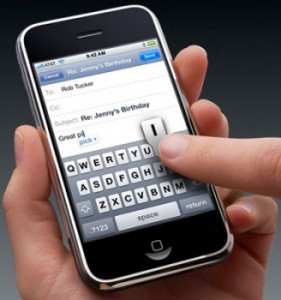 At the Starbucks for my Friday morning solo venti no-whip soy iced caramel macchiato with extra caramel, I noticed, as usual, many in the crowd busy on their iPhones and other touchscreen handhelds. What stuck out this time was that all of them were holding their devices with one hand and controlling them with the other, much like in this photo. Not like I hadn’t seen that before, but seeing this cluster of two-handedness made me wonder, is it the norm to use both hands on touchscreen handhelds?

If using a device in landscape mode, two hands on the device is practically necessary. But again, the people at Starbucks were holding in portrait mode in one hand and controlling with the other. That, to me, seems like a practice that should be deprecated.

I get why it started. My first handheld, an IPAQ Pocket PC, was easily controlled with one hand for media control and voice notes via hard buttons, but anything that needed to be done on its resistive touchscreen with stylus-designed Windows Mobile interface pretty much required a stylus in hand. Held in one hand and controlled by the other was the only way to go. However, with the capacitive touchscreen and touch-centric interface on my iPhone, I can now easily thumb around for 90% of what I do. I’m sure its competitors provide equal capability.

Most of what I do on my handheld is in vertical/portrait orientation. I’ll flip it for taking wide photos, watching videos, and getting a wider view of the screen contents, but I almost always tap out emails, surf the web, play Robocalypse, and do nearly everything else in portrait. Generally, I double-tap to zoom instead of pinch. I’m very adept at typing with one thumb in portrait and can’t get my head around two thumb typing in landscape. Controlling my handheld with one hand is actually more productive for me than two hands.

But maybe I’m the odd man out. What about you guys? What’s your preference in portrait mode? One hand or two?