Months after arch rival Time Warner announced a dedicated video subscription service that would bring HBO to millions of iPhones, iPads and Apple TVs, premium cable network Showtime is doing the same. Earlier today Showtime announced a dedicated service that’ll let anyone in the United States with some of the world’s most popular entertainment devices watch Showtime’s slate of premium shows and movies without first paying money to a cable or satellite operator.

Showtime’s website reveals most of the details concerning the new streaming video service. Beginning in July, anyone will be able to watch Showtime’s content through their Apple iPad, Apple iPhone and Apple TV, provided they have a decent internet connection. The long-running channel simply calling the  service Showtime, and at least at first it’ll offer 30 free days of video streaming to subscribers. After that the service will cost just $10.99 a month, roughly $3 less than HBO’s new streaming service, which is also only available on Apple devices for now. 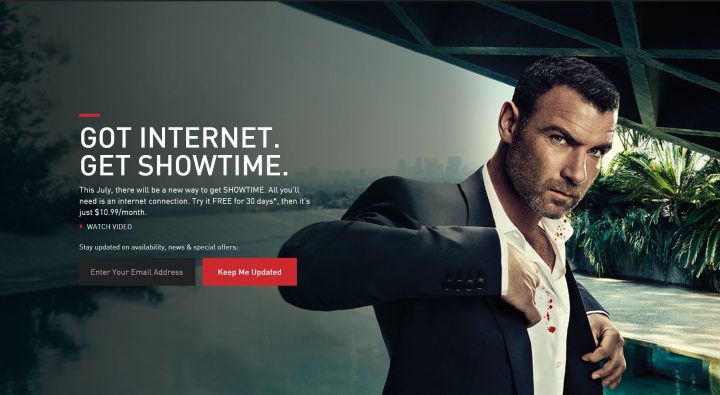 Showtime subscribers will be able to watch on their Windows and Mac PCs too when the service launches.

Showtime is known for it’s extensive collection of premium movies. In addition to movies that others produce, Showtime produces its own original programming. Homeland, Master of Sex, Shameless, House of Lies, The Affair and Penny Dreadful are among the shows all currently airing on the network. Classics include Dexter.

In an interesting twist, Showtime, the subscription service will offer something key that other services don’t. Showtime isn’t building just an on-demand video service, it’s also offering live streams of is actual channel. When friends are at home watching the next big season premiere on the network with cable, subscribers will be able to watch too. Movies and dramas aren’t the only thing available through the service, Showtime will offer streaming for documentaries, comedy specials and important sports events.

Slowly but surely we’re getting to the point where users won’t need a cable subscription to subscribe to premium channels. Showtime didn’t confirm this, but it and some of the latest movies Verizon and HBO are making are in response to the popularity of Netflix and Hulu Plus. Verizon now offers plans that lets users split different channels from their bundles for lower costs.

Each day millions of users log into Netflix to watch new Netflix original shows and a huge backlog of shows that already aired on traditional cable and broadcast television. The problem with Netflix is that sometimes it’s impossible to get shows as they air on the service. Hulu Plus is considerably less popular than Netflix, but offers fairly current shows the day after they air.

Presumably, this new Showtime service will rollout to Android and other devices later on.