If posts to the SimCity Facebook page are accurate, game developer Maxis is planning a large-scale expansion pack for the troubled city simulator.

The saga began last night when a small photo teasing a big announcement appeared on the game’s Facebook page. That announcement featured text reading “find out what the future holds in 2 days,” alluding that the company planned to talk more about what users can expect from the game going forward. Behind the text was a photo that was completely blurred out.

While the teaser itself didn’t hint at what users can expect from the big announcement on September 19th, a link from a newsletter accidentally sent out by Maxis, the game’s developer, seems to have detailed what the company plans to announce. 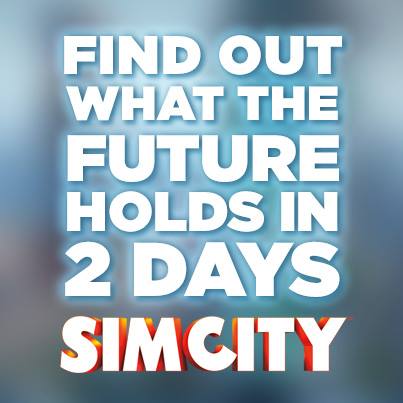 According to the screenshot of the newsletter area of SimCity.com provided by SimsCommunity, Electronic Arts plans to formally announce SimCity: Cites of Tomorrow, an expansion pack for the game that will allow users to “transform [their] cities into a utopian world powered by clean technology or a corporate metropolis feeding Sims’ insatiable consumerism.”

While the newsletter is heavy on bravado, it is also a little light on exact feature details. It only mentions users being able to create skyscrapers that allow more than one type of industry to flourish. For example towers in the expansion will, presumably, have both commercial and residential zoning. 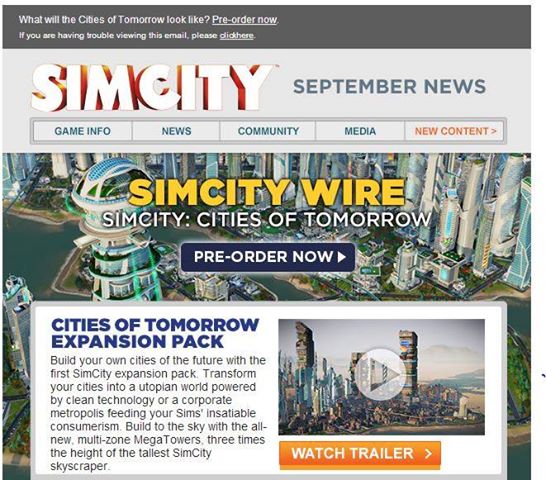 That Electronic Arts has plans to continue providing users with new content won’t take many gamers by surprise, since SimCity’s troubled launch this past March, the developer has continued to pump out small fixes and feature additions to the game. Mostly free of charge.

What will likely bother SimCity users is the nature of the expansion itself. Maxis and Electronic Arts won’t be allowing users to download the update for free. Instead when the update launches on November 12 it’ll cost users $29.99 according to Amazon. That’s on top of the $60.00 most users already paid for a standard version of the game earlier this year, plus the cost of each $10 building set that users may have purchased too.

Read: Maxis Drops the Ball on SimCity for Mac Launch

Whether Maxis is preparing to make SimCity: Cites of Tomorrow available for users on Macs is still up in the air at the moment. The Amazon pre-order page for the expansion back indicates that it’s only for Windows. SimCity only recently launched on Mac OS. At that time thousands of users flooded the game’s support forums with tales of constant crashes and buggy interfaces.