It appears that while the promise of contact-less payment through Google Wallet is the dream of the future, the NFC technology that drives digital mobile wallet and payment technologies is not without its own set of growing pains. Some users of the Google Wallet service on the Android platform have noticed problems with getting Google Wallet to authenticate with the NFC chip on their devices following a hardware restore to factory conditions.

Typically, a factory restore would alleviate any conflicting software that may cause problems or instabilities with a device, but the irony here is that users are beginning to notice problems arise from Google Wallet after a hardware restore. After the hard reset, users notice a popup that says “Secure Element not responding,” and they are prompted to “Please contact Google Wallet support.” 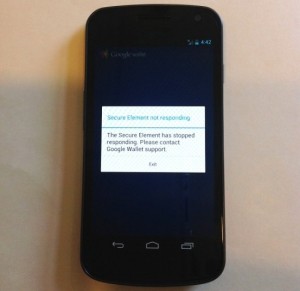 According to Phandroid, contacting Google Wallet support did little to fix the problem. Users are told that the problem arose because it’s their fault and that their phone would have to be replaced or exchanged for warranty service if applicable. Essentially, “there’s a security mechanism inside the NFC portion of the phone called the “secure element” that, if tampered with — or in this case a simple factory reset — will brick it, causing a “secure element error” when attempting to make NFC purchases Google thinks this common method of fixing up issues on the phone and also required before re-selling a device, is some kind of an attempt at someone engaging in some kind of nefarious activities by attempting to gain access to your funds.”

So far, it seems that users are reporting this issue on the HTC EVO 4G LTE and the Samsung Galaxy Nexus.

Reportedly, you can prevent the issue in the first place as well. Before reseting your device to factory conditions, you can go to the Google Wallet app to “Reset Google Wallet” and then restore your device. This should alleviate any problems that may or could arise. Also, there is a fix according to Phandroid, but that will require a backup of the device and someone experienced with handling ROMs:

Fixing the issue is a little more difficult. This requires someone who is experiencing the bricked secure element (after flashing a custom ROM) to restore a backed up ROM (before everything went down) and reset the Google Wallet app from inside the app’s settings. No backup? No dice.