Siri is a personal assistant app for the iPhone 4S that can respond to a number of commands.

Aside from asking Siri what the weather is, you can have Siri send text messages to others. This is one of my primary uses for Siri so far, but as I learned this past weekend, it can be tough to do with others around.

Not because of the ambient noise, though that is a problem at times, but rather because of Siri Bombing.

Siri Bombing only took a day to arrive, but something tells me it will take much longer to eradicate. 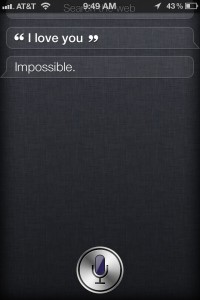 Siri Bombing is when the person you are with, or a random stranger, intentionally interrupts your Siri request. The name takes cues from Photo Bombing, the practice of jumping into and ruining someone else’s otherwise perfect photo.

The worst offenders, in my informal survey are spouses and significant others. While trying to wish a friend a happy anniversary this weekend, Siri almost told him that, “I love you” and “I want to kiss you.”

This is thanks to my practical joker of a wife. In her defense, I am still learning the limits of Siri, which means when I said to Siri, “Tell my wife I love her.” The actual message was “I love her”, not “I love you.”

Soon she will have an iPhone 4S, and two of us will be able to play at this game. For now, I will have to safeguard my Siri usage around others, sticking to a Bluetooth headset or using the actual keyboard.

Because I am not the only victim of a Siri Bombing, I kindly ask that you all stop Siri Bombing friends and family….or at the least anyone I know.

Sadly, I fear this post may do more harm than good.

At least Siri has some humor to help me through Siri Bombing.