Apple goes big on Siri features with iOS 6, including the ability to open apps with Siri.

Siri has long been able to play music and work with Apple apps, but third-party apps couldn’t play nice with Siri.

I’ve been using iPhone 4S jailbreak hacks to launch apps with Siri for the past few weeks and love the convenience of opening common apps like Pandora or Audible without tapping around on the iPhone. It’s amazing that it took this long to arrive, but I’m glad it’s finally here. 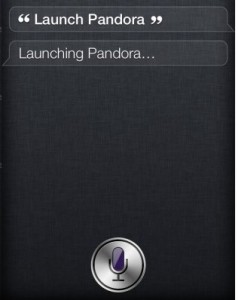 Unfortunately there is no SDK yet, so developers can’t let users ask Siri to “Play Everclear on Pandora” or “Watch Game of Thrones in HBO GO.”

The new version of Siri arrives with iOS 6, which will hit the iPhone and iPad later this fall around the iPhone 5 release date.

Users who can’t wait for iOS 6 to arrive this fall, can upgrade to the iOS 6 beta today to try out these new features.

Apple also added the ability to use Siri to look up sports scores and much more with the iOS 6, including FaceTime calls over cellular connections. Siri is also on the way to the iPad, which means it will be able to launch apps with Siri.

Stay tuned for more news from WWDC 2012 including the iOS 6 Beta, the new MacBook Air, new MacBook Pro with Retina Display and more.