Apple is bringing Siri to its most affordable iOS device, the iPod touch. The voice-assistant service made its debut last fall on the iPhone 4S and moved to the New iPad  earlier this year.

There are a few caveats however. The service is only available for when connected to the Internet, which makes Siri only useful when the iPod touch can connect to Wi-Fi. Without a Wi-Fi connection Siri simply can’t receive any information to relay to users.

To use Siri outside of a building with a Wi-Fi hotspot, users will need to carry around a mobile hotspot or use another device with that capability like an iPad, iPhone, or any other modern smartphone. 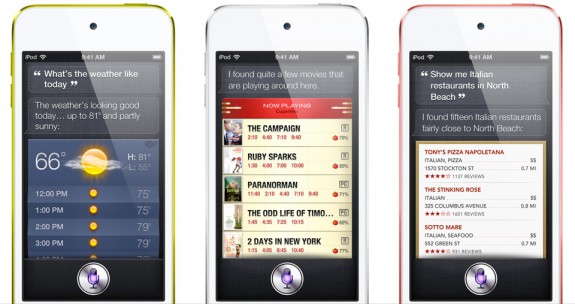 While that sounds like a big caveat, it’s actually a good idea for kids or students who will most likely use Siri at home or in school where Wi-Fi is available. It’s especially useful for college students with the new iPod touch as they can use Siri to quickly look up facts and calculations on Wolfram Alpha or search for answers with Google.

The new iPod touch will include the new version of Siri in iOS 6 which includes new features. With Siri in iOS 6 users can looks up sports scores, flight information, and movie times. Users can also use Siri in iOS 6 to send Tweets and Facebook status updates. Siri can also launch apps in iOS 6 and send messages over iMessage.

With Siri also comes dictation so new iPod touch users can just speak what they want to type instead of just typing it. As with Siri, dictation require an internet connection, which means it’s only useful when connected to Wi-Fi.