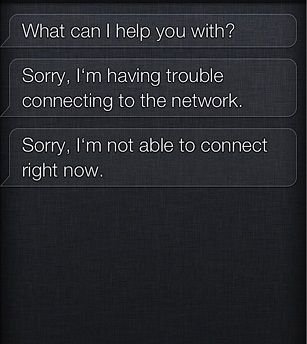 I’ve discovered something about Siri this week. I’ve been in and out of the office quite a bit this week. As those who’ve followed my mobile ramblings here at GBM might remember, I save a lot of my phone calls for when I’m in the car. Siri makes this easier as I can keep the phone in my pocket, tap my Jawbone ERA headset, issue a command to call so and so and I’m connected and talking. I really like this about Siri and it works much better than Apple’s voice command ever did.

With one exception. We’ve seen quite a few complaints from folks that say Siri has some difficulty connecting to the network since the launch of the iPhone 4S. What I discovered this week is that if I try to initiate a phone call as I’m heading to my car (usually parked across the street from my office) that Siri responds that it can’t connect. I’m usually in a rush so I’m frequently trying to initiate a call as soon as I get in the car, or sometimes even as I’m getting into the car. In these instances I’m discovering that Siri always fails to make a connection and politely tells me so.

After having this happen a couple of times, I realized that once I drove a few blocks down the street, all was well and good. The problem? My car is parked close enough to our building that it is on the fringe of our WiFi network and Siri is trying to use that for its connection. Once I’m out of range and the iPhone 4S knows it is on 3G then things happen as designed.

Curious about this. I did some random testing out front of our building. It’s an older brick building and depending on where you stand on the street you can pick up the WiFi signal adequately. Other places that’s not the case. Sure enough, if I don’t have a good WiFi connection Siri will fail to connect. This is a minor frustration in my case because I frequently go down on the street to conduct sensitive business calls. Our offices, even in an older building don’t have real doors and it is day to overhear any phone call. So, I’m getting myself in the habit of turning off WiFi when I come into the office so the connection issue with Siri doesn’t spring up when I least expect it (meaning when I need to make a call.)

So, if you’re having some Siri connection issues you might want to check your WiFi range and signal  before you assume the Siri network is down.