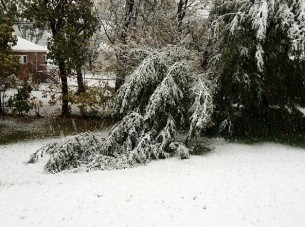 Today is just one of those days where Mother Nature throws you a curve ball. We’ve dealing with an uncharacteristic early snowfall her in northwestern Virginia that is causing all sorts of chaos because, well, it is uncharacteristic and no one was prepared for it. This was to be one of the peak weekends for seeing the beautiful fall colors on all of the trees that still have their leaves. Not any more.

Snow in our area unfortunately means the likelihood of cancelling a show at Wayside Theatre, and in fact, we’ve called off today’s 2:30pm matinee. The evening show is still on at the moment as we wait to see how much of this very heavy wet snow comes in. I’m actually more concerned about losing power as trees everywhere are bending under the weight of the snow and the leaves that haven’t fallen yet. The tree in our front yard lost four large branches this morning and one in our back yard is laying over. There are already reports of downed power lines in the area, so it probably is just a matter of time, given that we’re supposed to see snow fall for another 5 hours or so.

So, how does Siri come in to play, you might ask? Well, I live about 15 miles from the theatre and that means a crazy drive in during bad weather. Our area adopts a “the good lord giveth and the good lord will taketh away” snow removal plan so the roads were a mess coming in. But I traditionally am making calls all the way in on mornings like this. Today was no exception.

While I’ve tried to use Voice Commands on the iPhone in the past, it just isn’t as efficient as Siri. Using my Bluetooth headset (Jawbone ERA), I was able to contact employees and get the phone tree started to call our customers. I was also able to talk to the highway department to check on what they know.

Once arriving at the theatre and getting phone calls going out on our landlines to customers, I’d use Siri to make other calls while standing out front of the theatre. The nice thing about this is that I don’t have to touch the phone, just the headset. It’s not cold enough for gloves today, but I can see this being of benefit when it is later this winter. I’d say that out of 30 phone calls, sending 7 tweets, and posting once on Facebook, I only had three failures using Siri. Not bad.

Well, back to shoveling snow.